ALS Focus Results from the What Matters Most Survey 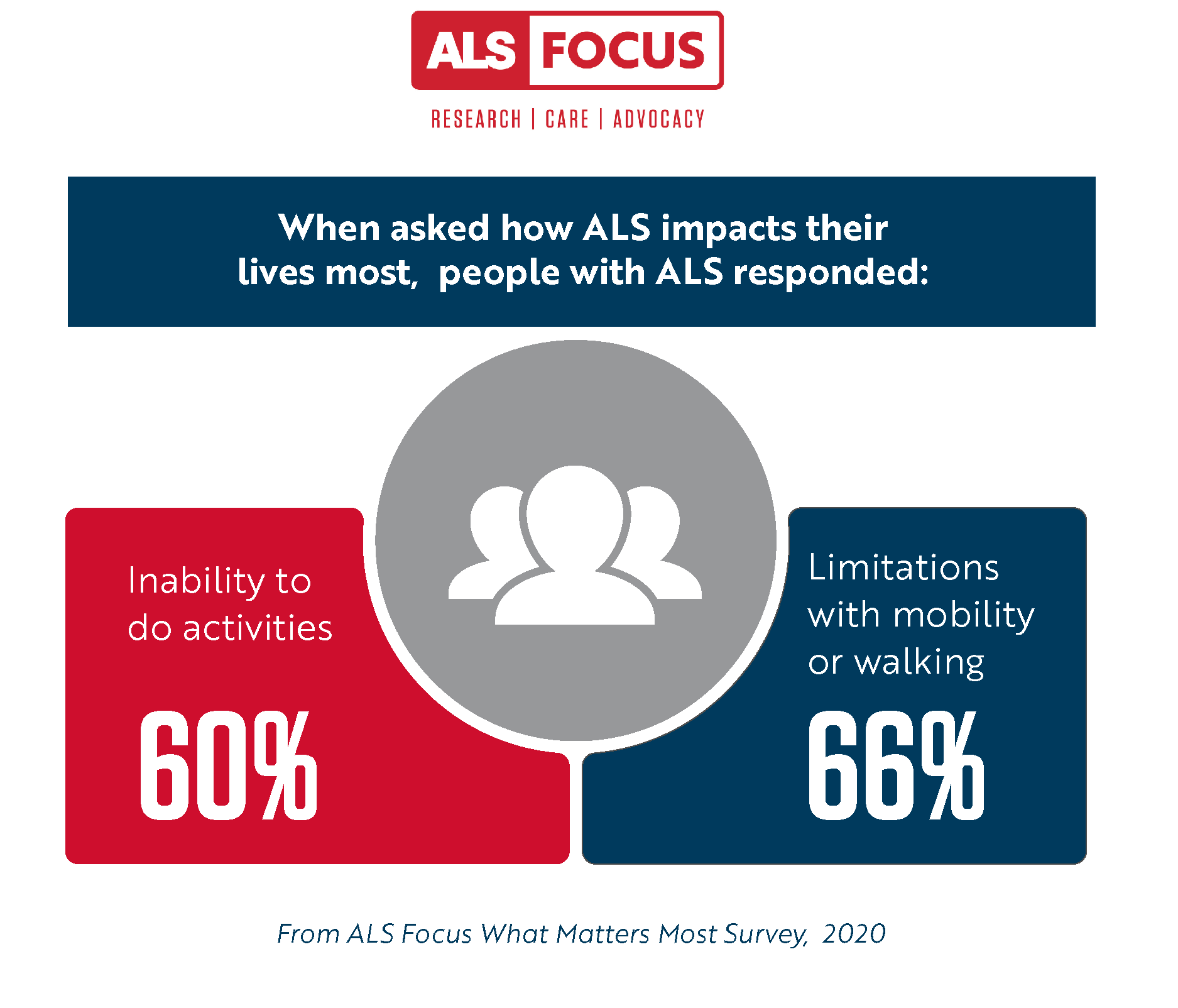 The ALS Focus What Matters Most survey utilized the ALS Health Index Short Form (ALS-HI-SF) developed by Chad Heatwole, MD, MS-CI at the University of Rochester. Dr. Heatwole developed the ALS-HI-SF through a series of studies with people with ALS. Based those studies, the ALS-HI-SF asks about 15 symptomatic concepts that people with ALS said were important to them.

The ALS-HI-SF asks people with ALS whether and how much each symptom currently affects their life. Using participants’ responses, we calculated several scores to determine which symptoms mattered most and overall disease burden. 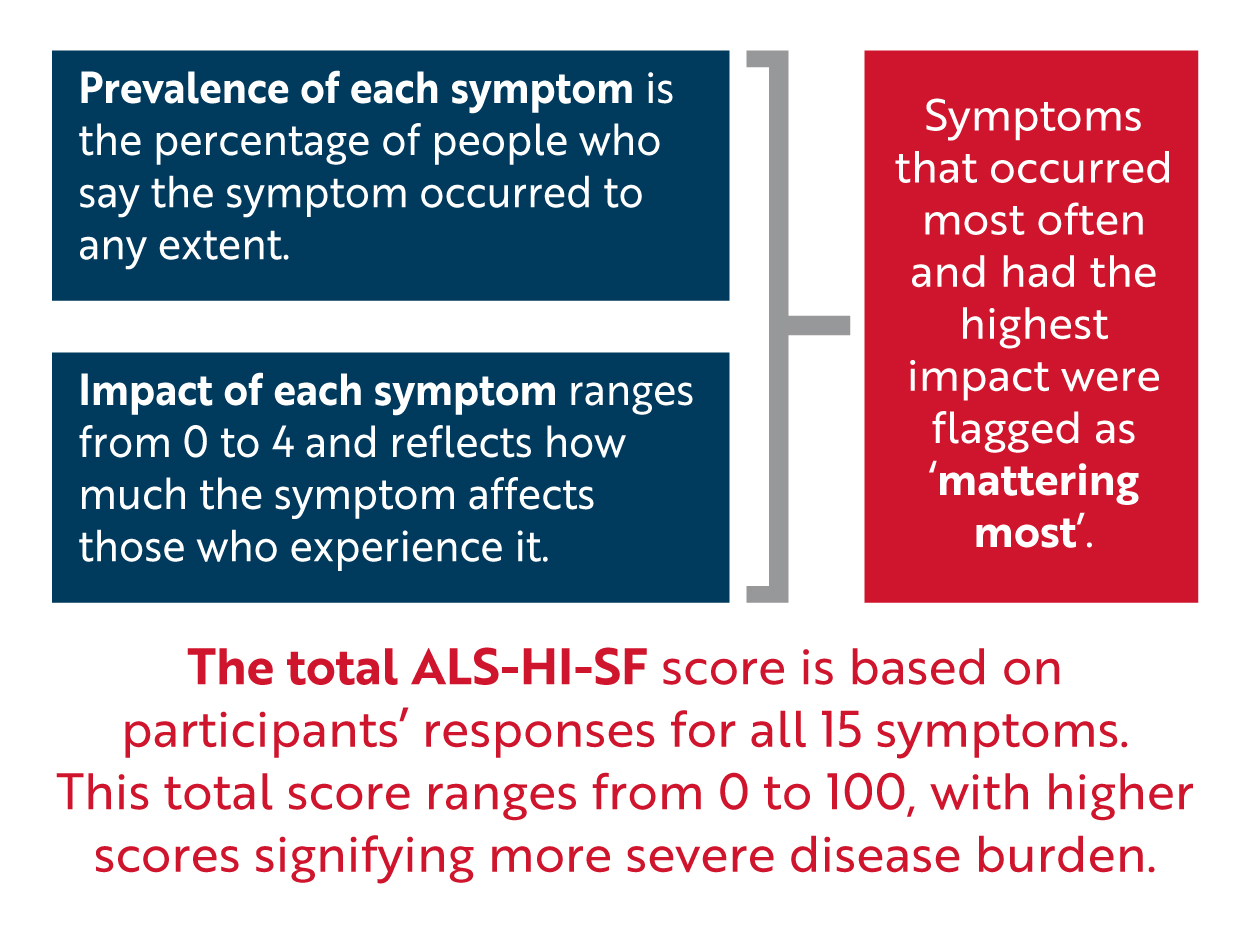 What Matters Most to People with ALS

Figure 1 shows which symptoms mattered most to people with ALS. The red bars show how often a symptom occurred, and the black bars show the average impact of each symptom. An inability to do activities occurred most often, and this symptom had nearly the highest impact on those who experienced it. Limitations with mobility or walking also occurred often and had the greatest impact. Taken together, these data suggest that an inability to do activities and limitations with mobility or walking mattered most to people with ALS who took the survey.

Figure 1. Prevalence and Impact of ALS Symptoms as Reported by People with ALS 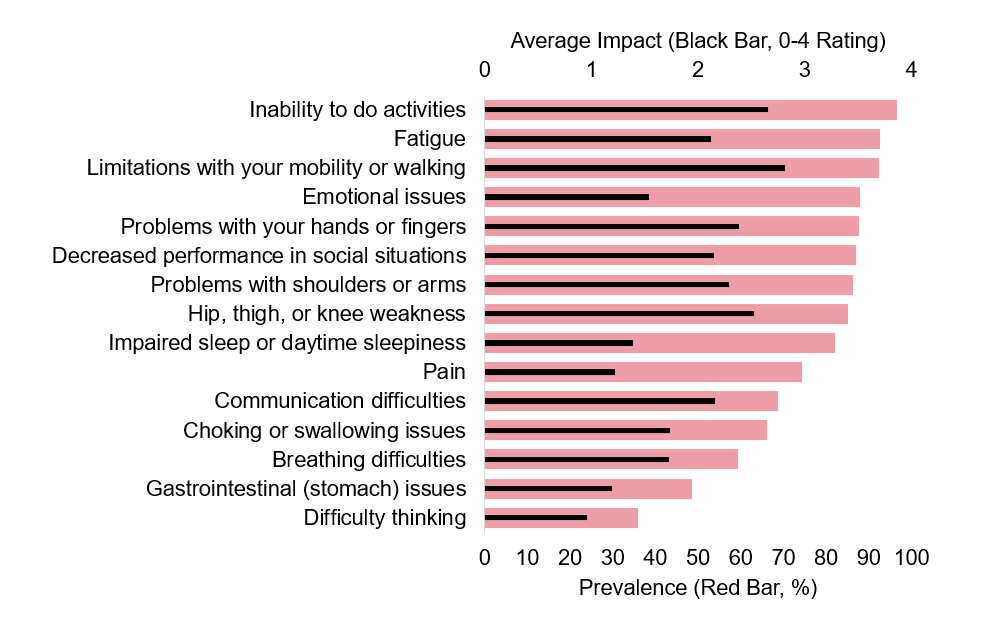 Caregiver Perspectives on What Matters Most

The ALS Focus team worked with Dr. Heatwole to adapt the ALS-HI-SF questions for caregivers, making this study the first to collect ALS-HI-SF data from caregivers. The modified questions asked current and past caregivers how much each symptom impacted the life of the person with ALS they care(d) for. We calculated the same three scores for caregivers—how often the symptom was reported, the impact of each symptom, and total ALS-HI-SF score.

Figure 2 shows current caregivers’ views on what mattered most to the people they care for. Inability to do activities remained at the top of the list, and limitations with mobility or walking was near the top as well. The pattern of results is similar between current caregivers and people with ALS, suggesting that caregivers do well at gauging what matters to the people they care for and could provide helpful information to clinical trials and other research.

Figure 2. Prevalence and Impact of ALS Symptoms as Reported by Current Caregivers 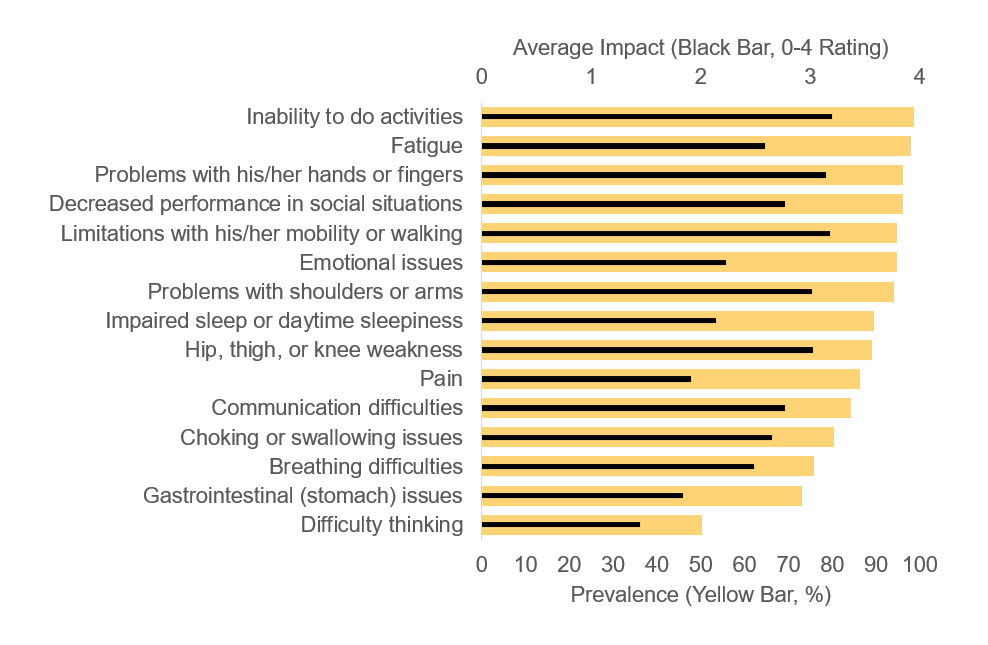 Figure 3 shows past caregivers’ perceptions on which symptoms mattered to the person they cared for. Past caregivers tended to rate symptom prevalence much higher than did survey participants with ALS, which likely reflects later stages of ALS that past caregivers experienced. Overall, an inability to do activities and limitations with mobility or walking continued to be the issues that were identified to have the greatest impact on the lives of people with ALS.

Figure 3. Prevalence and Impact of ALS Symptoms as Reported by Past Caregivers 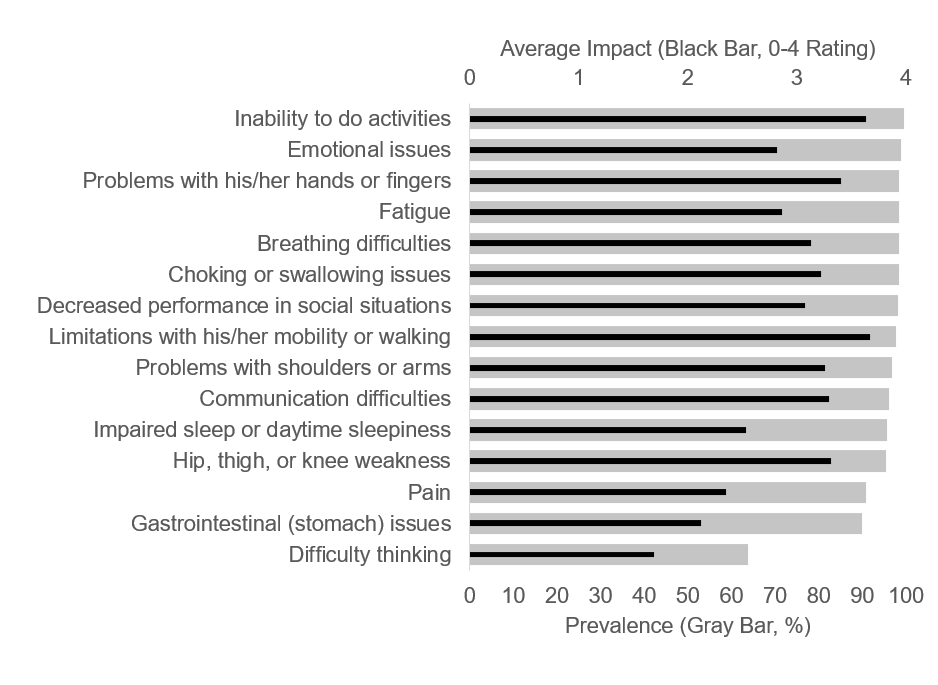 People with ALS as well as caregivers are able to provide an assessment of ALS disease burden based on their experiences. The What Matters Most survey demonstrated that the inability to do activities and limitations with mobility or walking mattered most to people with ALS. Results were similar when both current and past caregivers responded to the survey with their perceptions on what matters most to the ones they care(d) for. When looking at the index’s total score of disease burden (from 0 to 100 with 100 being the most severe), people with ALS scored in the middle, current caregivers scored higher, and past caregivers scored highest. This finding suggests different perceptions of disease burden, which is likely because of where the person with ALS is in their disease journey. We are conducting further subgroup analyses to dive deeper into this question.

Through this research on what matters most, the Association hopes to show how the ALS Health Index could be used in clinical trials to scientifically measure outcomes meaningful changes in people’s daily lives while taking an experimental ALS therapy.

Bringing patient and caregiver perspectives into drug development is imperative. This survey is directly in line with the U.S. Food and Drug Administration’s (FDA) call for rigorous patient input on key areas of drug development (i.e., patient-focused drug development). Patient experience data, like data collected in this What Matters Most survey, could help influence industry in clinical trial design, selection of outcome measures, clinical meaningfulness, and benefit/risk calculations. It could also impact regulatory, coverage, and payment decisions.

Sharing what matters most to people with ALS and caregivers is the ultimate goal of the ALS Focus survey program.

The survey took place online, and participants self-reported their answers and disease state. People with ALS who had motor impairment were permitted to have someone else answer questions on their behalf. This study has an exemption determination from the Western Institutional Review Board.

The results presented here are not intended to represent the full population of people with ALS and their caregivers in the United States. Instead, these results reflect the burdens and experiences of those who participated in the survey.