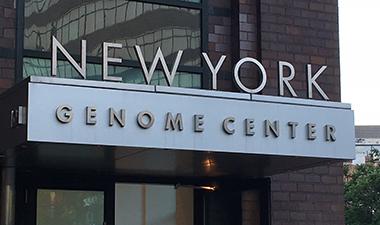 Recent discoveries have indicated that genes may contribute to a much larger percentage of ALS cases than previously thought. Finding these genes and understanding how they work will allow development of new therapeutic approaches.

The CGND has formed an international ALS Consortium to apply integrated genomics to advance the clinical diagnosis and care of ALS. Through a multidisciplinary collaborative effort that spans multiple ALS centers and bridges ALS clinicians and scientists, researchers are using whole genome sequencing to discover and study mutations and mechanisms underlying ALS.

The CGND’s research program in ALS was established with the help of generous support from The Tow Foundation and The ALS Association that was announced in October 2014. The Association, in partnership with the Greater New York Chapter of The Association, committed $2.5 million to fund this research, directly from money raised through the ALS Ice Bucket Challenge. This matched a gift of $2.5 million from The Tow Foundation.

The CGND’s goals are to use whole genome sequencing to identify mutations that cause neurodegenerative disease. To gain insights into the relationship between mutations, gene expression and disease mechanisms, whole genome sequencing data will ultimately be integrated with other genomic-scale data such as RNA-Seq (i.e. RNA sequencing), RNA-protein interactions and DNA methylation patterns (i.e. a type of post-translational modification).

The CGND is helping to create a uniform system of collecting clinical annotation to better enable the integration of genomic data with clinical profiles. This information will be freely available to the research community in a data warehouse for whole genome sequencing and RNA-Seq analyses.

How the NYGC advances the search for a treatment for ALS