Skip to main content
Guide / Manual from the ALS Association 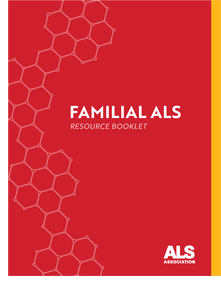 It can be overwhelming to learn that you or a family member has ALS. Receiving the diagnosis of familial ALS can raise extra questions and concerns about the future. This booklet will help answer these questions and provide information to support you and your family.

About 10 percent of people with ALS have familial ALS, which means more than one family member is affected by the disease. The other 90 percent is sporadic, or singleton. Scientists believe that most cases of familial ALS are caused by mutations in genes. Both familial and sporadic (or singleton) ALS cause muscle weakness and loss of the ability to walk, speak, eat, move, and eventually breathe.

Approximately two-thirds of all cases of familial ALS have been linked to specific genes. Altogether, over 30 genes have already been linked to ALS, and more are likely to be discovered.

Familial ALS is most often autosomal dominant. This means if a child receives a copy of an ALS-associated genetic change, or mutation, from just one of their parents, he or she is likely to develop ALS, too. Both men and women are equally likely to inherit genetic mutations associated with ALS. Typically, although not always, there will be someone in each generation with ALS. Familial ALS can present at different ages and progress differently in various family members.

This booklet will explore components related to the genetic inheritance of ALS.

Genetic testing is available to confirm the presence of genetic mutations associated with ALS. A genetic test can help confirm the cause of disease in a person who has already developed ALS. A genetic test can also be done in the healthy relatives of someone with a confirmed genetic cause of ALS. Such predictive testing is usually done to help the relative determine whether they are at risk for developing ALS as well.

The guide will help you prepare for the possibility of genetic counseling and testing by reviewing:

The ALS Association provides a variety of printed materials free of charge to help deal with the impact of ALS.