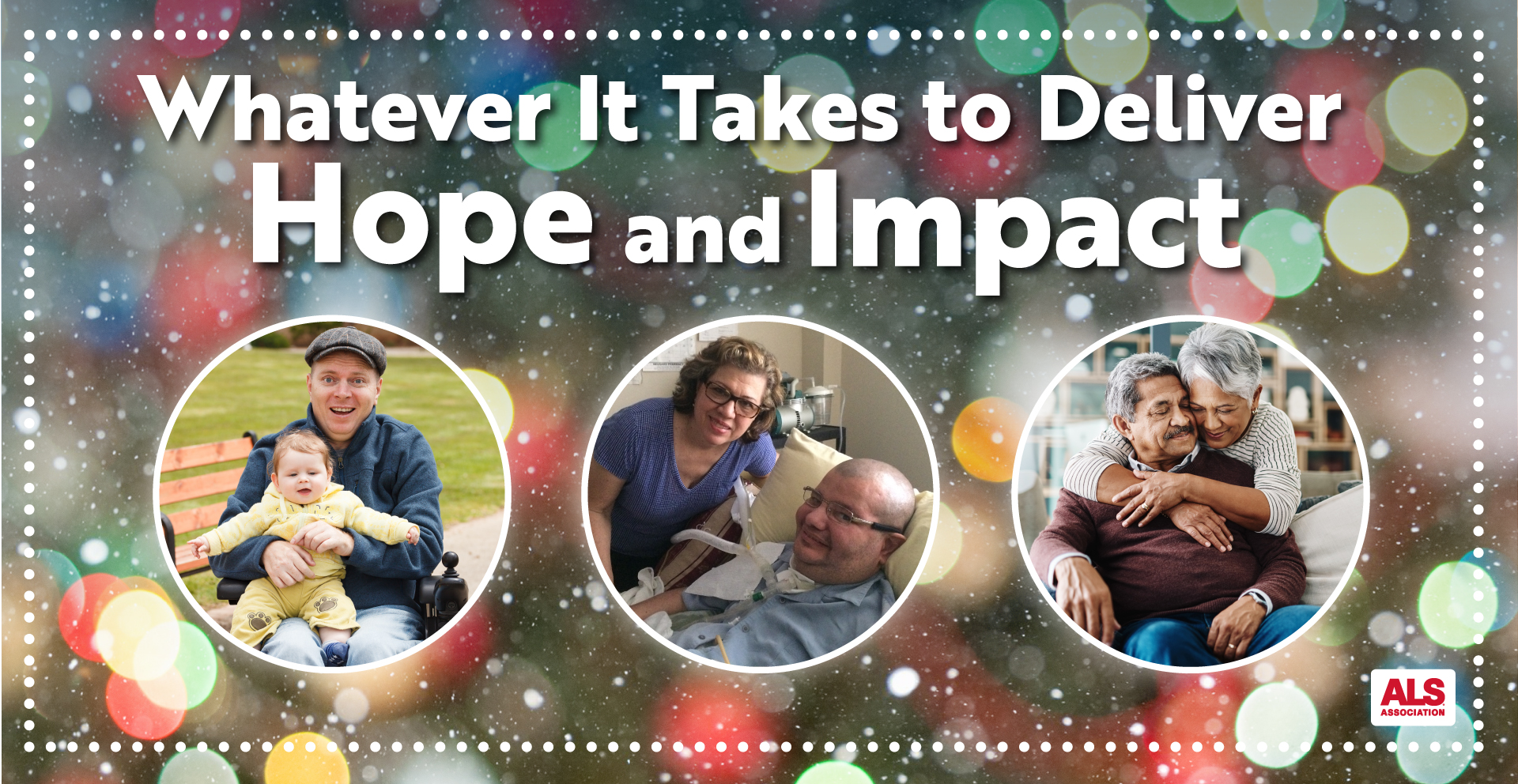 Thanks to your continued generosity, in 2021, we were able to continue making progress in our quest to create a world without ALS. Our commitment to making ALS a livable disease means longer lives for people living with ALS, improved quality of life and preventing our loved ones from getting ALS. That is why we continue to do whatever it takes to find new treatments, optimize care and prevent or delay harms associated with ALS – and ultimately to find a cure.

Doing Whatever it Takes to Find New Treatments & A Cure

We are currently providing funding for 155 active projects in 12 countries around the world, representing a current commitment of $52 million. This is in the context of a total commitment of over $116 million expended on research since 2014.

When that commitment to research leads to promising new treatments, we immediately begin the work of making those treatments available to the community. Throughout 2021, we continued to work tirelessly to bring AMX0035, a promising new drug shown to extend life and slow disease progression, to people living with ALS. And we’ve never been closer. Amylyx recently filed a New Drug Application with the FDA for approval of AMX0035.

From our We Can’t Wait Action Meeting that brought the voice of the ALS community directly to the FDA, to our recent call for the agency to conduct a priority review of Amylyx’s New Drug Application, we have led the way to bring this promising treatment to market as quickly as possible.

Listen to the team at Amylyx talk about their journey from the dorm room to the FDA – and the support The ALS Association provided along the way.

That’s just one illustration of the robust ALS drug development pipeline. Other promising developments in 2021 from research we supported includes:

Our advocacy for swift approval for AMX0035 is just part of our efforts to bring greater speed and effectiveness to the agency.

We continue to advocate for a series of policy actions to help the FDA accelerate development and delivery of effective therapies. We are also asking Congress for $50 million for the FDA to fund clinical research to benefit people with ALS and for Congress to fund a study by the National Academies of Science and Medicine to help coordinate the entire ALS research agenda. In addition, the House and Senate this year appropriated $1 million for a study to identify and recommend actions for the public, private, and nonprofit sectors to make ALS a livable disease and the House approved $5 million in new funding for the Orphan Products Grants Program (OPGP) at FDA at our request. This program can fund ALS clinical trials and invest in regulatory science to speed the approval of ALS treatments.

We have also led the fight for enactment of ACT for ALS, legislation that supports access to experimental treatments and provides the FDA additional research capacity and public private partnerships to speed development and approval of new treatments. The bill was recently signed into law.

To learn more about our efforts to move ACT for ALS through Congress, check out this discussion with the bill’s primary sponsor in the House, Rep. Mike Quigley of Illinois.

This year we launched a new grant funding program to support early stage clinical trials. In addition, our Milton Safenowitz Postdoctoral Fellowship Program welcomed four new fellows to the program that is the only program of its kind specifically funding early ALS postdoctoral fellows eagerly understanding the disease biology and searching for a cure. Our Lawrence & Isabel Barnett Drug Development Program awarded close to $3M to 6 projects to invest in bringing potential treatments into clinical trials.

To reduce the time it takes for a diagnosis of ALS to be confirmed, this year we launched  thinkALS, an early diagnosis guide targeting general neurologists to help them identify ALS symptoms right away and refer their patients to multidisciplinary ALS centers as quickly as possible.

In November, we joined our partners in calling on governors in all 50 states to use their authority to waive state licensure requirements and thus enable people with ALS to use telehealth to visit doctors across state lines. This flexibility was granted during the COVID-19 pandemic, and it is a flexibility that people in our community utilized to access their multidisciplinary care teams. This is just part of our ongoing fight to make sure people with ALS are able to access expanded access to telehealth.

Through the Jane Calmes ALS Scholarship Fund, which was established in 2019 to provide $5,000 for students directly impacted by ALS, the Association awarded 100 scholarships for the 2021-2022 school totaling $500,000. Since its inception this scholarship program has awarded 239 scholarships equaling $1,195,000.

Listen to two recent recipients of the Jane Calmes ALS Scholarship Fund talk about the impact it has had on their lives on Connecting ALS.

This past year we also conducted three new ALS Focus surveys covering caregiver needs, telehealth and mobility challenges to learn directly from the community what their needs are and how to tailor programs and services to be responsive to those needs in real time. There are already more than 2,200 members participating in ALS Focus.

Our nationwide network of chapters showed incredible ingenuity and innovation through the pandemic by implementing digital and socially-distant modes of providing support, resources and care programs to help people affected by ALS improve their quality of life and reduce harms associated with the disease.

Doing Whatever It Takes to Bring More People Into the Fight

This year, more than 37,000 people in communities across the country participated in 169 Walk to Defeat events. From car parades in Florida to virtual “Walk in Your Neighborhood” celebrations in the Northwest, the ALS community found unique ways to gather in honor of loved ones with the disease, to remember those who have passed, and to raise awareness and critical funds to support the fight against ALS..

In addition, the newest approach to peer-to-peer community action began rolling out in communities across the country as 15 CEO Soak events were staged with corporate or community leaders getting soaked once again for ALS through personal & team fundraising, challenging of peers, and boosting employee morale.

This year the ALS community’s relationship with Major League Baseball hit another homerun with the inaugural Lou Gehrig Day on June 2. In stadiums across the nation, teams offered people living with ALS and their families special game day experiences like New York, Seattle and Philadelphia to name just a few. This day would not have been possible without the hard work of members of the Lou Gehrig Day Committee and the ALS community who were determined to make this day a success.

None of these advancements would be possible without the generous support of our donors and partners. To learn more about the work of The ALS Association and how we're doing whatever it takes to make ALS a livable disease, visit ALS.org/whatever-it-takes.