Using a Megaphone to Tell MY ALS Story 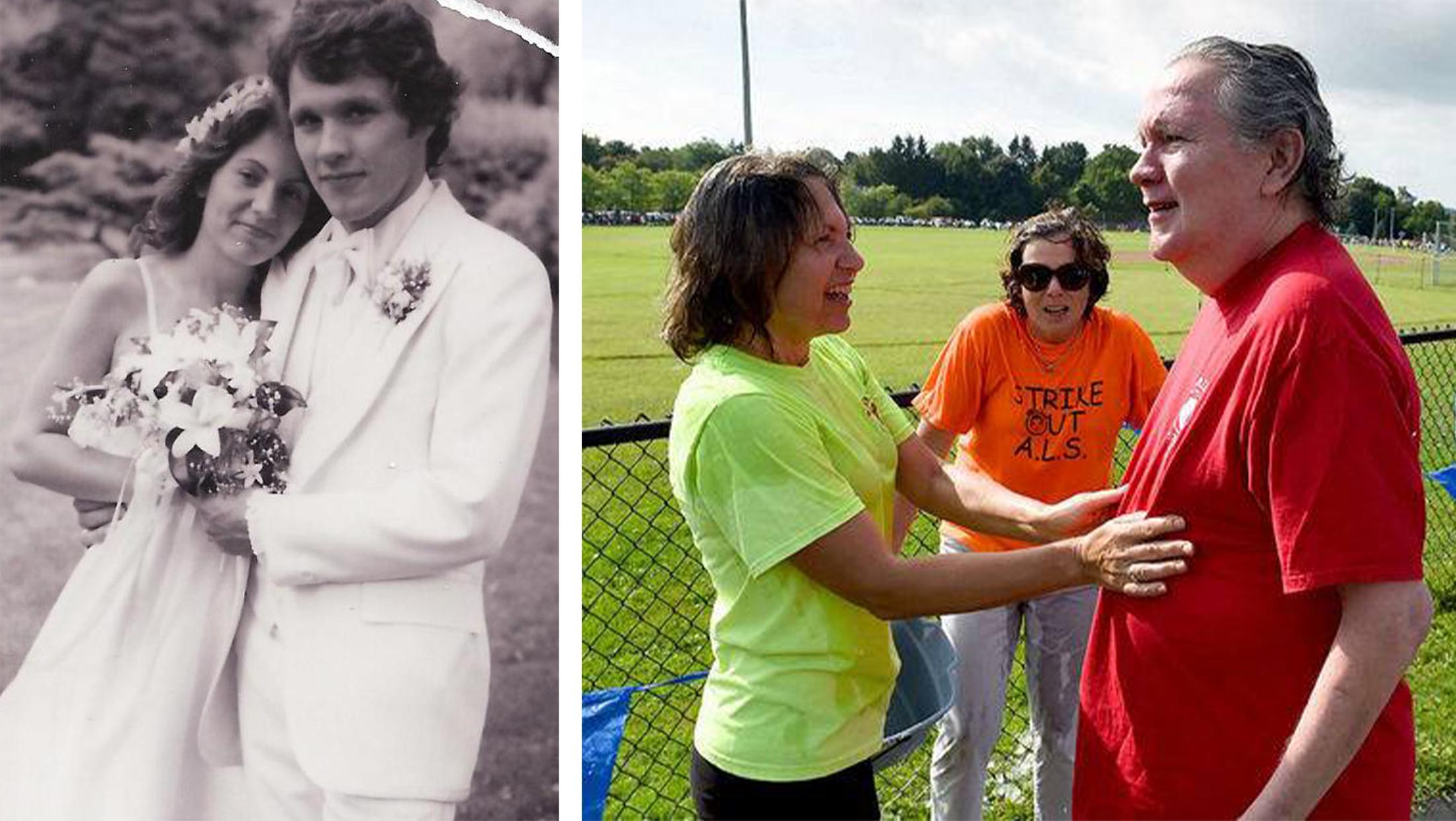 When my husband Tom was diagnosed with ALS, we were embraced by the ALS community. But as his health declined, I didn’t really feel ALS was what was stealing my husband from me. I felt more connected to people losing loved ones to frontotemporal dementia, also known as FTD. The recent article by the Association about the connection between ALS and FTD has helped bring me full circle.  I DID lose my husband to ALS… a particularly cruel and nasty form of ALS that includes FTD.

Here is MY ALS story.

When hundreds of people streamed into our local park six years ago to do a community ALS Ice Bucket Challenge (with my husband Tom as one of the central local ALS honorees), I was astonished and touched. I also knew it would take me years to fully digest the magnitude of the event.

I was right. Today, the kindnesses shown that day make me cry with gratitude. I feel the icy water of the challenge and the incredible warmth of that giant community hug. And I remember the internal conflict I felt.

I had been hesitant when friends wanted to organize the day in honor of Tom. I was a reluctant participant and, honestly, a very weak advocate for ALS. When it came time to thank the crowd, I handed the megaphone to our son.

The reason: Tom wasn’t a typical sufferer of ALS. I struggled with even calling his disease ALS, because the harder and scarier truth was that something was stealing his personality, thoughts, and intellect much faster than ALS seemed to be weakening his muscles.

I suspected this even at the very beginning of his ALS diagnosis. The symptoms were not just physical. He was subtly different. And even as this became increasingly pronounced and obvious to me, it seemed I was alone and shouting into the dark. At the ALS Clinic in Syracuse, with a renowned ALS doctor, the focus was only on the slight weaking of his hands and the decline of his lung function. Tom was on the “slow track” of ALS, and might have ten full years to live, his doctor said. Tom clung to this, announcing it proudly: “I have ALS, but I am on the slow track.” He couldn’t sense the other changes in himself that were keeping me awake at night.

Each visit to the clinic, I tried to express worry over subtle changes I was seeing: the repetitive coined comments he made to everyone we saw on our nightly walks; his changing work ethic; his growing lack of empathy. He was missing appointments and making embarrassing jokes. But it was so subtle and hard to define. I didn’t want to say all of this in front of him at a doctor’s appointment. I didn’t want to hurt his feelings, make him defensive, or make him self-conscious, so I handed the health care providers my written observations.

He was friendly and jovial with the people in the clinic. He loved going there for his monthly appointments. He would walk down the hallway as though he was a celebrity, stopping inappropriately inside other exam rooms to say hello to the nurses and doctors. He wasn’t like any of the other patients. When his doctor suggested Tom needn’t rush to sell his business because he would likely have several if not many years to be productive, I cringed. I knew Tom’s sharp business acumen was rapidly fading.

I read the symptoms (the exact same list recently published in an article by the Association):

Tom fit almost every one. My heart sunk, and yet I was also relieved. Finally, an answer. I knew what was happening to the man I loved. It wasn’t “only” ALS. Was it ALS at all?

Back then (2007-08), doctors and scientists were learning of the link between FTD and ALS, but it was not often discussed. A neuropsychologist finally said the words that those late-night Google searches had already told me.

Research is increasingly showing the link between ALS and FTD, and the recent article by the Association has welcomed me “home.” The Association’s article says this:

“An ALS diagnosis is a devastating diagnosis in and of itself, but to learn your loved one has FTD as well can make it even more challenging to comprehend.”

Although my husband was first diagnosed with ALS, I now believe he experienced symptoms of FTD long before our journey took us to neurology departments seeking the reasons behind his whole-body fasciculations. 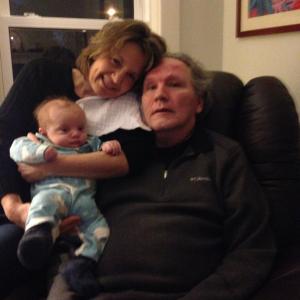 In the years he declined, and in the years since his death, I have come to know the journeys of many others affected by “just” FTD or by combined ALS-FTD. And I know that the “unknowing” is often the most painful period, leading to the biggest tragedies and the greatest angst. FTD often leads to destructive behaviors, job loss, financial ruin, divorce, and heartache. (We were “luckier” than some others in that we didn’t face most of those things). What we did face was the unknowing.

Now, thanks to ongoing work by scientists, the Association can stress “it is important for all who are impacted by ALS to know that cognitive impairment is possible and how to help those affected adjust to the changes.”

By the time our community gathered in September of 2014, Tom’s FTD prevented him from taking in all that kindness or expressing his gratitude. And the FTD prevented me from being an eloquent and grateful spokesperson for The ALS Association. We didn’t “fit in” with ALS and shifted focus to the AFTD, which addresses the biggest losses our family endured.

Now, thanks to ongoing research and communications, I could (and can and will) stand up with a megaphone to discuss the horrors of ALS, which can steal a person’s ability to think, communicate and feel, as surely as it steals their ability to walk, talk and breathe.

Special thanks to Lori Ruhlman for sharing her family’s story and their personal journey with ALS. To learn more about ALS and FTD, read our blog here. To learn more about what The ALS Association is doing to better understand cognitive changes and ALS, visit our website here.

Many thanks to Lori for her story. My husbands Kevin had ALS-FTD also and passed away just two years after his first symptoms started. His FTD made it very difficult to diagnose his ALS and caused the doctors to delay a final diagnosis until it was too late to treat his ALS. ALS is a tragic enough disease to experience, but the combination is truly horrible as Lori described. I pray for a mayor breakthrough for treatment and hopefully a cure someday. Thanks again for this story.

Thank you for sharing your story. I completely agree, as FTD began to affect my father during his fight as well. (I STILL tell people that the FTD was a kick in the stomach, as if ALS wasn't bad enough!?!) We all just need to KEEP TALKING about this so families are prepared if they are faced with the 10-15% that also experience FTD.

Thank you for sharing your story, Lori. My husband lost his heroic fight against ALS-FTD three and a half years ago. Your story could be my story. The FTD symptoms were there long before the ALS took his body. I reached out to ALS support groups and felt like I didn’t belong. The article in last month’s newsletter confirmed what I had discovered in my late night researching of what was happening to my wonderful talented husband.

Thanks to all for your comments. It is so sad/tragic to know how many experienced similar journeys ... yet comforting to be connected. Agree with you, Cynthia, about the importance of last month's ALS newsletter in confirming this connection.

Lost my lovely wife Diane 2 years after diagnosis of ALS/ FTD. Fortunately we did have 50 years together. I agree the not knowing is probably the worst you can experience. FTD robbed her of her being with the only conciliation being that maybe she was unaware. I’ll never know

Glen,
You make such an important point, and it is one I have often thought about myself. I also have thought that the "silver lining" of FTD is that it protects the person from feeling the worry and devastation of the ALS diagnosis.

I'm here in support of my neighbor who's mom was diagnosed with ALSFTD. Thank you for sharing your story. I feel for those who have FTD as well because MY mom has had dementia since 2014. She's 96 now. Neither condition should be navigated without many support teams. Local Govt Groups, friendships, even FB Groups. Every journey is vastly different (I work in activities at mom's memory care and see the differences), but we can all benefit from "venting" and learning new ways to cope and treasure those who have lost so much control.

Dawn, this is so true! Thank goodness for support groups and friends.

And on what we shall stop?

Thanks for sharing about the FLD, my husband just passed away from Bulbar onset ALS and he had the FLD. Such a hard thing to see him change and physically he was doing good but he couldn’t speak and had a feeding tube and then he was changing with his texts and so hard to see him struggle in all areas. What a hard disease.

My husband just died of ALS after a 2 year and 8 month fight to live. Glad to finally read an article about frustration of the lack of attention to ALD-FTD, thank you! However, another issue is rarely touched on that fits a bit with FTD. Just before the ALS symptoms began a very slight personality change started and continued and advanced through diagnosis and the advancement of ALS. I felt like NO ONE was listening to this symptom. I still have no answers to this day, still have not read anything about it. I felt I was screaming in the dark! It is only after his death that my therapist who has dealt with ALS families for decades has told me of similar stories in personality changes. What a moment to finally hear someone say this. It was not typical dementia and its symptoms, but had an element to it. I don't necessarily think it was FTD, but I don't know where it fits. MORE, a lot more needs to be talked about regarding this. It is heart breaking to the caregiver, because in many ways I felt I lost my husband long before his death from ALS.

Oh my Carly, I feel for you. On top of all the loss (as he declined physically) you also must have felt such confusion ... and that comes with so many other feelings. And then to never have it validated ... to never have it addressed ... tough. Even harder in many ways than our case, where I DID end up getting another/additional diagnosis or name to what I was seeing. I so get the feeling of shouting into the dark. If you ever want to discuss/write more, I'd be happy to have you contact me. The ALSA has my email address.

In 8/2020 my husband was diagnosed with ALS. Six months later In 2/2021 he passed away. About one year before his diagnosis his speech was slurred, he had great difficulty swallowing, loss of arm strength and loss of weight. I began to see mental changes in his ability to remember dates, recall events, use of words but we never associated it with ALS. I miss him every minute of every day. Thanks for listening.