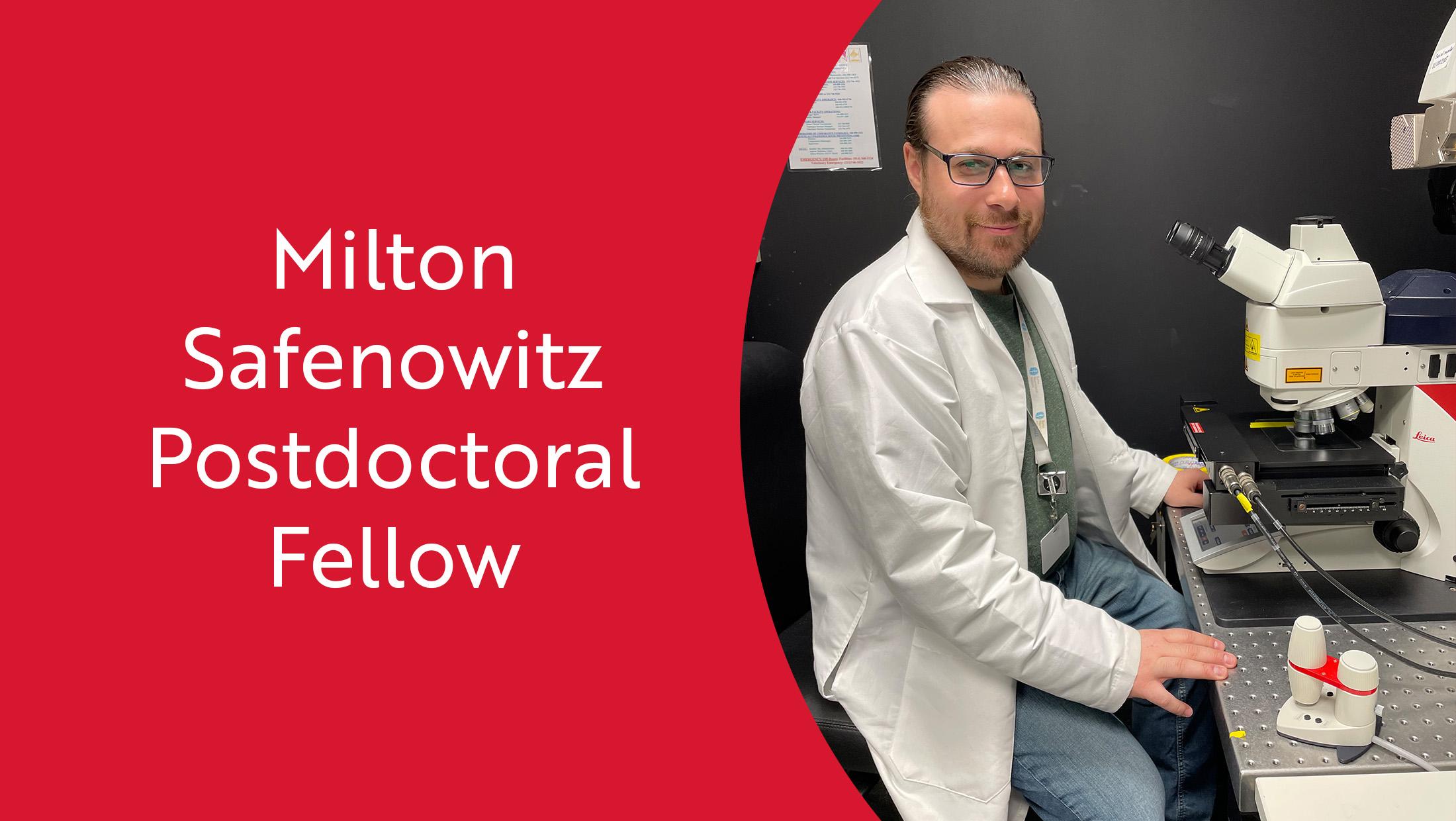 It’s going to take all of us working together, doing whatever it takes, to make ALS a livable disease and ultimately find a cure. That includes researchers like our 2021 Milton Safenowitz Postdoctoral Fellowship Program recipients who are playing an important role in helping to make this happen.

The  Milton Safenowitz Postdoctoral Fellowship Program continues to support young scientists and is the only program of its kind specifically funding early ALS postdoctoral fellows eagerly searching for effective treatments and a cure. Founded in memory of Mr. Safenowitz by the Safenowitz family through The ALS Association Greater New York Chapter, this unique program encourages young scientists to enter and, importantly, to remain working in the ALS field.

After completing the program, more than 75% of the postdoctoral fellows go on to start their own labs to continue studying ALS and mentor other young ALS researchers. “The Safenowitz Program is key to developing the pipeline of ALS researchers who year in and year out reinvigorate the field and help push the quest for new treatments and cures for ALS forward,” said Dr. Paul Larkin, director of research at The ALS Association.

This year, we were proud to support four new postdoctoral fellows from a highly competitive applicant pool. We are excited to highlight their dedication and unique contributions to ALS research, as well as their interests outside of the lab.

We talked with Dr. John Kalambogias, postdoctoral fellow from Columbia University, to learn more about his research focused on dysfunction and degeneration of corticospinal tract neurons in ALS mouse models.

Can you briefly describe your academic background?
I began my early research career as an undergraduate at Queen College, City University of New York (CUNY), under the guidance of Dr. Joshua C. Brumberg. There I worked on characterizing the normal development of microglia in barrel cortex of mice, as well as the impact of sensory deprivation on their distribution and morphology. This research was published in the Journal of Comparative Neurology in 2019.

This initial research was my first exposure to neuroscience and eventually led to my interest in pursuing neuroscience in graduate school. After receiving my bachelor’s degree in Neuroscience, I was accepted to the Biology, Ph.D. program at the Graduate Center, CUNY. My graduate research contributions focused on investigating the development of connections between the motor cortex and spinal motor neurons, the corticomotoneuronal (CM) connection. This connection is thought to be important in dexterity and other skilled hand movements. Working with my mentor, Dr. John H. Martin, a neuroscientist at the CUNY School of Medicine, and in collaboration with the Dr. Yutaka Yoshida lab from Burke Neurological Institute, I studied a knockout mouse, in which the gene for PlexinA1 has been deleted. We discovered that this mouse has a significant number of CM connections compared to control mice, which do not have a functional CM system. The significance of this research has been published Science in 2017.

Following graduate school, I decided to pursue a postdoctoral position to continue my training in the motor system field and apply my knowledge of the CM motor system towards ALS. Joining the lab of Dr. Neil Shneider at Columbia University, a prominent ALS clinician, and Dr. Yutaka Yoshida a neuroscientist at Burke Neurological Institute, presented the ideal opportunity.

What are the goals of your funded research project?
In patients with ALS, deficits in motor control occur as a consequence of the degeneration of corticospinal neurons (CSNs). ALS is a genetically complex disease with causal mutations in over 30 ALS-related genes. In these ALS mice, however, the dysfunction of CSNs is surprisingly limited and is likely due to the different connection patterns between CSNs and spinal motor neurons in humans versus mice. In humans, CSN circuits include corticomotoneuronal (CM) connections to spinal motor neurons, as well as to spinal interneurons. In contrast, mice have few CM, only forming connections with spinal motor neurons, via interneurons, and therefore incompletely model the human CS circuit in disease. It has recently been shown that the ligand-receptor complex, Semaphorin6D/PlexinA1 is important in development of CM connections. Remarkably, PlexinA1 knockout mice have an abundance of CM connections, making the model similar to the human.

Therefore, we have a unique opportunity to use the PlexinA1 mutant mouse and test the role of human-like CM connectivity in the pathogenesis of ALS and study the mechanisms by which connections between CSNs and spinal motor neurons contribute to the spread of the degeneration in ALS. We will use a PlexinA1 knockout mouse which displays abundant human-like CM connections, together with established and novel ALS mice, to analyze CS circuits. Our central hypothesis is that progressive defects in CSN motor circuitry will be exacerbated by the establishment of CM connections in ALS mice. The goal is to elucidate the structure and function of CS circuits in established and novel mouse models of ALS and test the role of the direct human-like CM connections in the pathogenesis of both CST and spinal motor neurons in ALS mice.

Why did you decide to study ALS over other diseases?
I felt the generation of a “humanized” ALS mouse with corticomotoneuronal (CM) circuitry will provide the ALS field with a highly disease-relevant system to explore cellular and molecular mechanisms of corticospinal (CS) and spinal motor neuron pathology, and to elucidate pathways between CS and motor neuron degeneration that may be targets for drug discovery in ALS.

How might your work impact the ALS community?
We have a unique opportunity to use the PlexinA1 mutant mouse model which exhibits corticomotoneuronal (CM) connections and test the role of human-like CM circuitry in the pathogenesis of ALS. Furthermore, we can study the mechanisms by which these direct connections between corticospinal neurons (CSNs) and spinal motor neurons contribute to the spread of neurodegeneration and test promising drug candidates and therapeutic strategies in ALS mouse models.

Where can people get more details about your research project?

It is often said that ALS is one of the most complex diseases to understand. Yet, you go to work every day to tackle the challenges of your research. What gives you hope that there will someday be a world without ALS?
I believe that in recent years there has been a dramatic increase in ALS knowledge, particularly in the development of promising therapeutic strategies such as antisense oligonucleotide approaches. My mentor, Dr. Neil A. Shneider, recently published a paper in nature medicine where antisense oligonucleotide silencing of Fused in sarcoma (FUS), an RNA-binding protein that is genetically and pathological associated with rare and aggressive forms of ALS, can be used as a therapeutic strategy to treat ALS-FUS. Studies such as these provide me with a tremendous amount of hope that ALS patients around the world can get access to fundamental therapies.

What do you like to do when you aren’t in the lab?
I enjoy spending time with family and friends. I also love to play sports including basketball as well as spending time outdoors appreciating nature.

Is there anything else you’d like to add?
I am incredibly grateful and thankful to The ALS Association and the Safenowitz family for supporting my research efforts. I look forward to working on this project and sharing new data with the ALS field.

Stay up to date with the latest ALS research news by subscribing to our monthly newsletter, Research Matters. To learn more about the research we fund, visit als.org HERE.

To continue to follow stories from people in the ALS community and learn more about the disease, subscribe to receive our weekly blogs in your inbox HERE or follow us at als.org/blog.

Would love to be updated on your research. I am beyond grateful for your determination in helping the ALS patient. Bravo! This grant is evidence that you will go on to make a difference in neurodegenerative diseases.