Caregiving and ALS: It Takes a Village 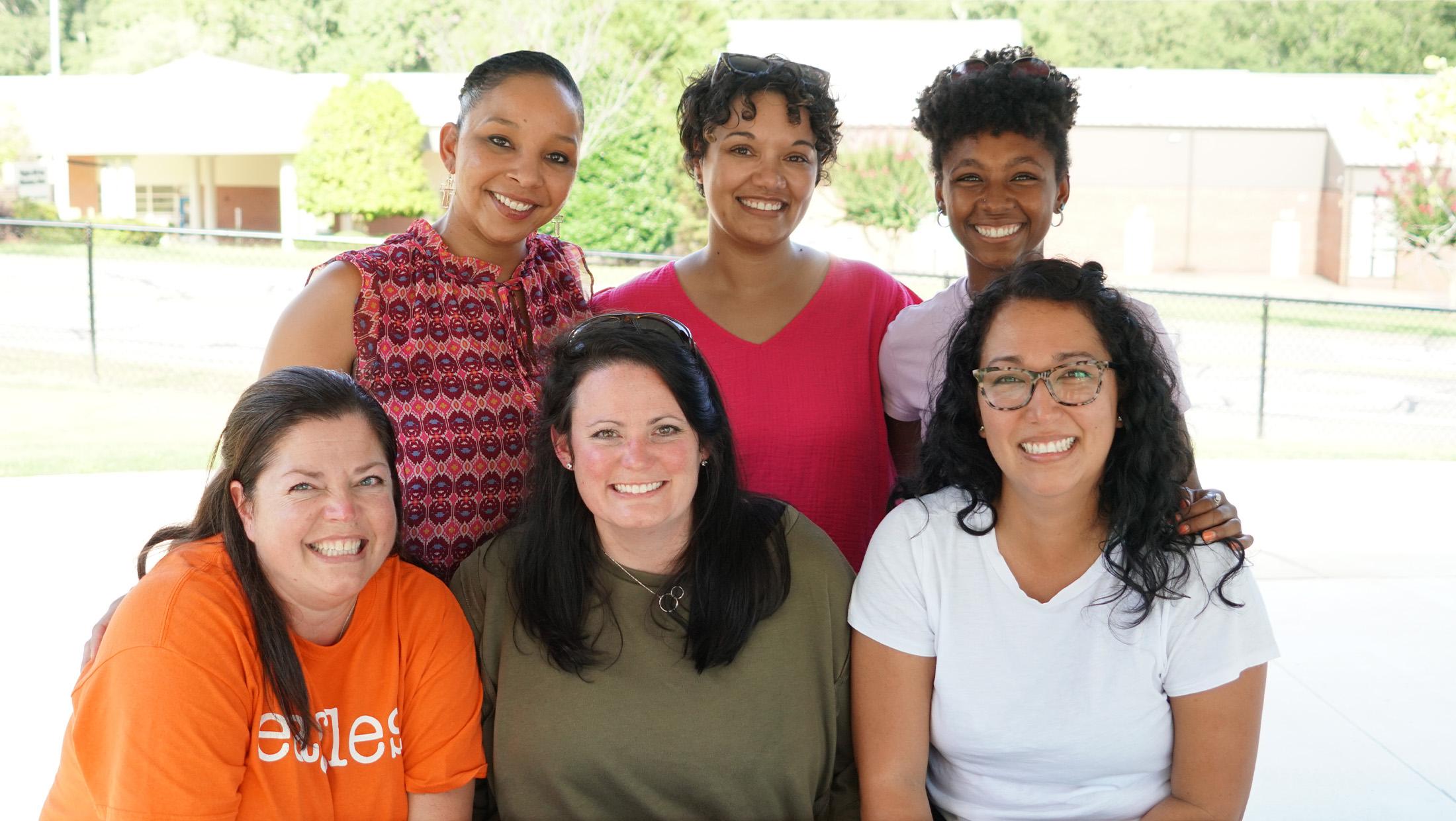 The ALS journey is difficult, so whether it is family, or friends or community volunteers, finding people who are willing to help, and accepting the help they are able to give, can make all the difference.

Lamar and Kristina Woody say that the best version of their “village” right now is found within their friendships. “We are so grateful for their ongoing love and support of our family. They are with us when we laugh, which we all love to do, and they are with us on the hard days when we don’t,” says Kristina.

We had the privilege of sitting down with the Woody family’s “village,” to talk about ALS, how it impacts their everyday life, and their incredible devotion to be a part of the family’s ALS journey. Here’s what they had to say.

How did you come to know Kristina and Lamar?

Joy: I met Kristina through work. She was the nurse at our school, and I met Lamar through Kristina. He loves music and he was teaching music lessons at Spicer's, which is right next to where my daughter took dance. And so we would see them several different places where we would go.

Christi: I know Kristina and Lamar from school. She was our school nurse and was right up the hallway from us. And we're like a family and we get into people's business real fast. You kind of walk through hard stuff in public school together.

Monica: Same thing, from the school. I think we gravitated towards each other not only because we look similar, but we just figured out there's so many similarities, it's almost scary. And I guess she put up with me. So I'm like, "Hey, you're my best friend." They're just absolutely wonderful people that…you want to surround yourself with people that make you better and I feel like that definitely. I feel like I'm a better person knowing them and it's reflective. I mean, it's great. It's a win-win.

Nicole: I met Kristina and Lamar about seven or eight years ago. Our daughters were in My Gym together, which builds everything, motor skills, social skills and just meeting Kristina right off the bat. Just the most down to earth person. And when I met Lamar through her, gosh, I'm like, "There's something special about you guys - you are just grounded, and strong faith.” And you would never know what they're going through just by how they carry themselves every day. We are lifelong friends, just beautiful people like that are hard to come by and we became more of a family.

Did any of you know what ALS was before this or what did you know about it?

Monica: I think, before I met ALS, I think of Stephen Hawking. But it's different, it really is. That was the only thing that I knew beforehand and meeting it in real life, in a real person, it's definitely different.

Nicole: And I think too, when Lamar started first getting sick, we thought it was cancer or brain tumors, and then it wasn't until we found out it was ALS and we had to do the research. A lot of people don't know about it. And I told my husband, this is serious. This is something that they don't have a cure for.

Christi: I think you have the textbook definition of it. You know what it looks like, you think you do, but then you put the human element into it and it's the struggle. The day in day out that you're like, "This is not a small thing."

Kayla: I had no idea what ALS was, coming in. I had no idea, but I'm seeing it firsthand and I'm actually seeing an image of ALS and I know it's a hard thing and there needs to be more people out there that know and are aware of this disease, of this lifelong disease. More people need to know about it.

Christi: I mean, I would really want to define ALS as more like a “thief.” And that's what I really want to say. ALS is a thief, and it really is. And it's... you don't know what's happening next. There's not a chart where you can go to go, "Oh, this is the order of this."

Christi: Something's taken, and you don't know what's taken until it's gone. And I think it's angry.

Nicole: Being Natalie's teacher this year, I can see the effect that it has on her. Seeing her as a baby and then three, four, five. At that point, she didn't really understand that her daddy was sick and now it's a daily thing. She's like, "I just want for my daddy to get better." With ALS it's... it's a really devastating illness and I see the impact it has on her and Kristina, our friends and family. It's hard, it's hard.

How important is it for each of you to be there for Kristina? You talked a little bit earlier about Natalie and the community that surrounds them.

Nicole: They have a lot on their plate right now, and so knowing that they have support, genuine love and support is everything. Lamar and Kristina, both will message me, we message each other, and they just have no fear because their baby (Natalie) is with all of us during the day. Kayla too, taking care of Natalie too. Trying to get her to school, doing her hair, picking her up. We just do that for each other. We are family.

Kayla: Yeah. It's definitely chosen. And it's like... I just can't imagine not doing it because it's just... Obviously it's needed and Nat teaches me things, Lamar teaches me things. So I'm gaining as well. So it's just beautiful.

For people that don't know what ALS is or how ALS impacts a family or a community, what would you tell people that are watching or learning more about Lamar, Kristina, and Natalie?

Kayla: And I also think it's important to bring light because there's a lot of darkness going on, obviously, because you don't know what's going to happen. So it's also great to bring light. And music, Lamar loves music. So he'll be my coach and so I'll learn a couple of things from him again. So it's also cool to keep that lightness.

Nicole: Peace and happiness. They deserve every bit of it.

Christi: I'd say make a lifetime of memories in the time you have. Which is good for all of us.

Kayla: Yeah, I'd say peace. And just knowing that it's going to work out the way that it's supposed to.

Christi: I think they're a good picture of walking through it without living in the fear of it.

Christi: They're just doing life, and this is something they're crawling over. It isn't defining, it's just walking through it.

Nicole: A strong couple that can laugh together, cry together, and just enjoy life together.

Special thanks to Kristina’s “village” for allowing us to share their thoughts about ALS with the community. We are continuing to share more each week about the Woody family and their everyday life living with this disease, and we hope you will follow along and share with your family and friends.

In honor of National Family Caregivers Month, download this infographic about caregiving and share on your social platforms to support a caregiver you know. To learn more about how you can get involved in the fight against ALS, visit our website HERE.