Amylyx completed a randomized, placebo-controlled phase 2 clinical trial for PB/TURSO, also known as AMX0035. In November 2021, the company submitted a New Drug Application (NDA) to the FDA that, if approved, will allow them to market and sell PB/TURSO in the United States. FDA began a priority review of application  in December 2021. The FDA gave June 29, 2022 as the target date by which the FDA intends to complete its review and decide whether or not to approve the drug.

On March 30, 2022 the FDA’s Peripheral and Central Nervous System Drugs Advisory Committee voted 6 to 4 against recommending AMX0035 for approval to treat people with ALS. It’s important to note that the Advisory Committee’s views are not binding on the FDA. Read more.

Amylyx also filed a New Drug Submission (NDS) in Canada in June 2021 through Health Canada and submitted a Marketing Authorization Application (MAA) in Europe through the European Medicines Agency (EMA) on January 4, 2022.

Meanwhile, Amylyx began a phase 3 trial (called PHOENIX) in the U.S. and Europe. On March 18, 2022, the company announced the launch of an Expanded Access Program (EAP) for AMX0035 in the United States for people living with ALS who are ineligible for participation in the PHOENIX clinical trial. 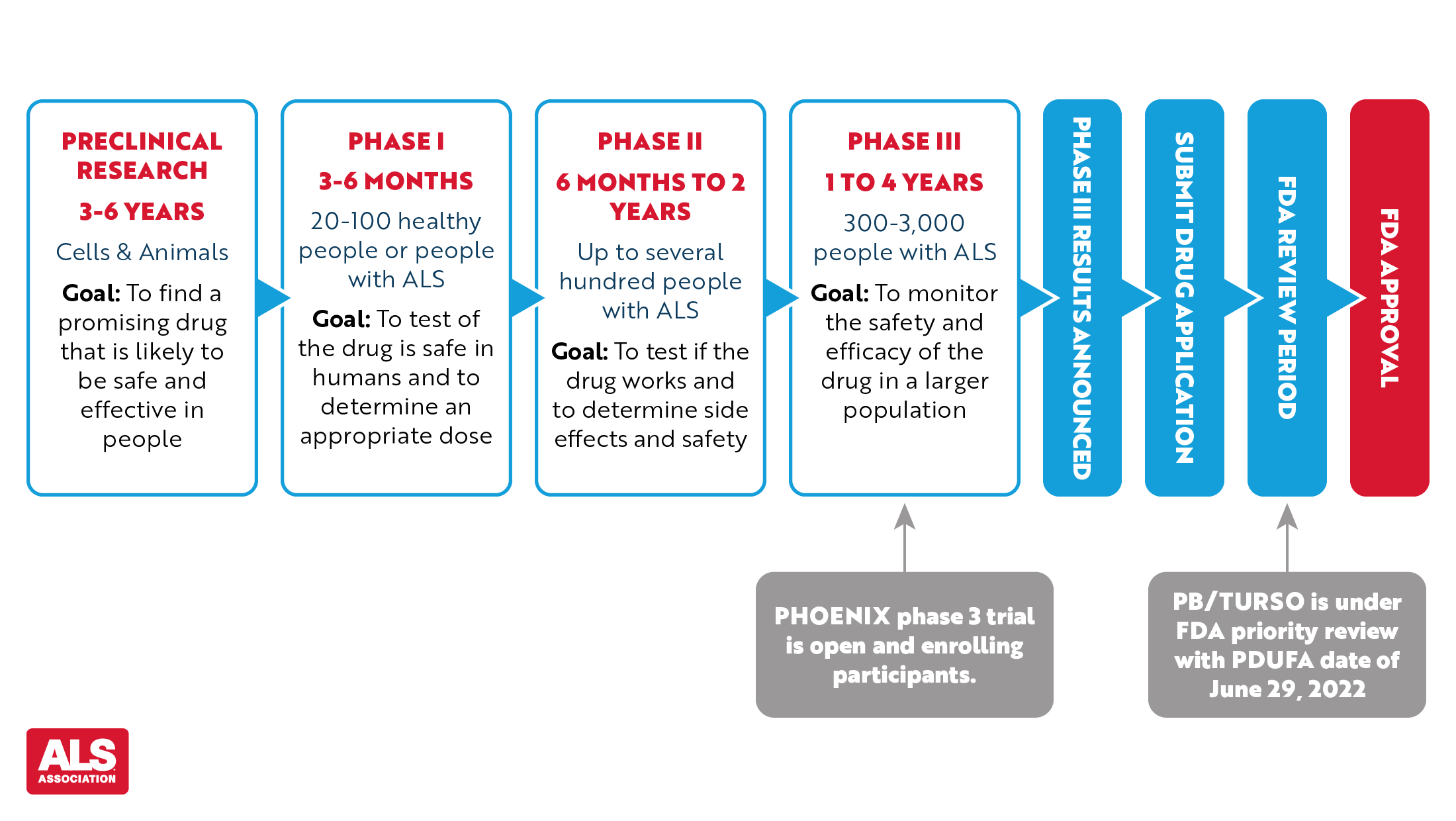 PB/TURSO is an investigational drug, also known as AMX0035. PB/TURSO is a combination of sodium phenylbutyrate (PB) and taurursodiol (TURSO).

PB/TURSO is designed to slow disease progression by slowing or preventing motor neuron cell death. Motor neurons are the cells that die in ALS.

PB/TURSO targets both the endoplasmic reticulum (ER) and mitochondria in ALS in motor neurons. This is important because the ER and mitochondria are connected (via mitochondrial membranes) and both play critical roles in maintaining neuron health and survival.

PB/TURSO comes in sachet packets of a powder that is dissolved in room temperature water. It can be administered by mouth or by feeding tube. In the phase 2 trial, the dose regimen was to take the drug once daily for first three weeks and then twice daily if tolerating.

What have researchers learned about PB/TURSO so far?

Amylyx published a peer-reviewed paper in the New England Journal of Medicine outlining the results of the CENTAUR phase 2 trial and another outlining the trial’s  overall survival data in the journal Muscle and Nerve.

Overall, the trial enrolled 137 people with ALS in 25 medical centers through the Northeast ALS (NEALS) Consortium from June 2017 to September 2019. It showed that PB/TURSO was well-tolerated and there were no major safety concerns. Side effect rates were generally similar between the PB/TURSO and placebo groups, but the PB/TURSO group did report more gastrointestinal issues (for example, diarrhea). PB/TURSO also significantly decreased the rate of decline in the Revised ALS Functional Rating Scale (ALSFRS-R) compared to placebo.

Almost three years after the first participant started in CENTAUR, in July 2020, the difference in survival between the PB/TURSO group and the placebo group was evaluated. People with ALS who received PB/TURSO at the start of the CENTAUR trial lived an average of 6.5 months longer than the comparison placebo group.

The CENTAUR trial included an open label extension phase, where all participants who completed the placebo-controlled phase could enroll and receive PB/TURSO. Investigators also collected data during the OLE phase and Amylyx will publish that data soon.

How The ALS Association is supporting the development of PB/TURSO

The ALS Association committed $750,000 to Amylyx in funding for PB/TURSO research and $1.4M to the NEALS clinical trial consortium to support the phase 2 trial. These grants were made possible through the ALS Ice Bucket Challenge. ALS Finding a Cure also supported this study.

Through a standard repayment clause, the Association could recoup up to 150% of its research investment, which it will reinvest in additional research.

The Association, in collaboration with I AM ALS, submitted a petition to the FDA in November 2020 calling on the agency and Amylyx to act swiftly and with urgency to make PB/TURSO available as soon as possible. The petition was signed by more than 50,000 people from across the country who have been affected by ALS.

Learn more here. Learn how the FDA responded here. And how The ALS Association responded back to the FDA here.

In addition, the Association hosted a “We Can’t Wait Action Meeting” in May 2021 that called on the FDA to use the existing authority and flexibility it promised the ALS community it would use to make experimental drugs that show incremental benefits available as quickly as possible. This directly applies to the results of the phase 2 CENTAUR trial.

Read more about the PHOENIX phase 3 trial and your eligibility to participate.

Information from the International Alliance of ALS/MND Associations