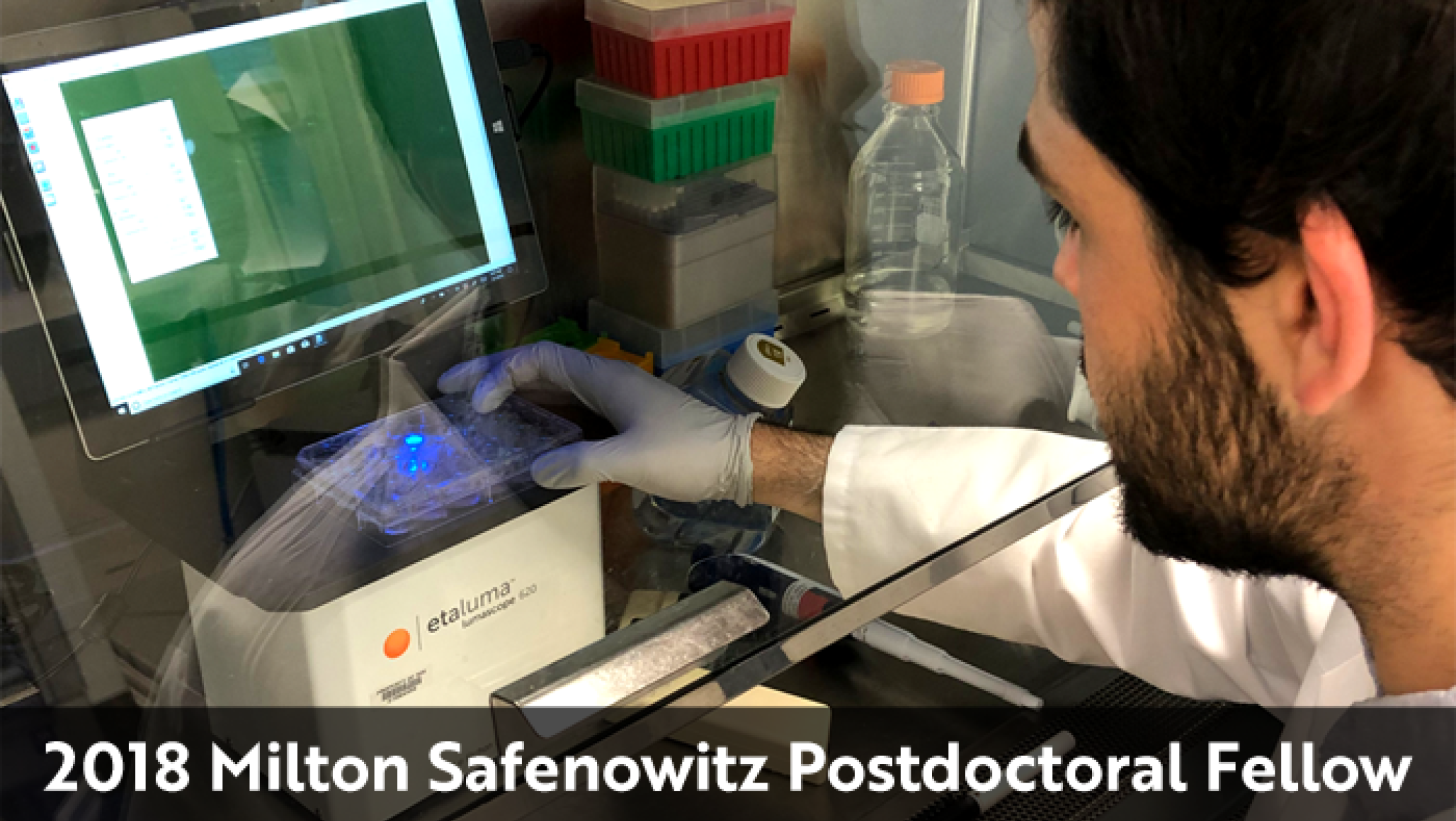 Our Milton Safenowitz Postdoctoral Fellowship Program continues to support young scientists and is the only program of its kind specifically funding early ALS postdoctoral fellows.

The awards were founded in memory of Mr. Safenowitz by the Safenowitz family – through The ALS Association Greater New York Chapter. The program encourages young scientists to enter and, importantly, to remain in the ALS field.

We are proud that 76 percent of the postdoctoral fellows we fund go on to start their own labs to continue studying ALS and mentor other young ALS researchers. The rest of our Safenowitz fellowship program graduates go on to careers in the biomedical industry, nonprofits, and medical writing, with many still staying in the ALS space.

This year, we are supporting five new postdoctoral fellows out of a highly competitive applicant pool. Over the next few weeks, we will highlight each fellow – their dedication and unique contributions to ALS research, as well as their interests outside of the lab.

We recently talked with Dr. Jorge Gomez-Deza with the Eunice Kennedy Shriver National Institute of Child Health and Human Development (NICHD)/National Institutes of Health (NIH) to learn about his unique research project, which has the ultimate goal of identifying a druggable target that prevents neuronal death.

Why did you choose to focus on ALS research?

I was convinced to focus on ALS research by my PhD mentor, Prof. Christopher Shaw at King’s College London. I found it fascinating that, in the 21st century, there was still a disease that had no cure and no diagnosis. It felt appropriate to focus my research time in trying to come up with treatment for people that suffer from ALS.

I am also interested in the common features between neurodegenerative diseases, such as Alzheimer’s and Parkinson’s Disease. Why is it that certain kind of neurons die in these diseases? Why are proteins aggregated? What are the genetic and environmental factors that cause these diseases? These are some of the questions I am interested in answering.

What do you like about working in the ALS research field?

I especially like the fact that it’s a small family. People really get to know each other and their research. This allows for the possibility of collaborating closely with many groups and innovating together. I also really like the fact that there is so much left to understand that people have to be incredibly innovative.

What are the goals of your funded research project?

The ultimate goal of the project is to identify a druggable target that prevents neuronal death. In order to do so, we are going to systematically silence 21,000 genes and observe whether the neurons survive when they are subjected to stress. If we find any interesting candidates, we can quickly test it in mouse models of ALS. We are hoping that we can collaborate with some pharmaceutical companies to generate a clinically relevant way of silencing our top hit.

Although we do not expect to fully impact ALS patients in the short term, we expect to impact the ALS community in several ways.

Millions of people took the ALS Ice Bucket Challenge during the summer of 2014 – almost five years ago. Were you one of them?

I first heard about the Ice Bucket Challenge in mid-August 2014 and immediately decided to carry it out. I got the whole Shaw lab to do it and nominate other prominent ALS researchers in the field. We finally got the whole lab together, which is not easy at all. However, unlike many other people that were doing the Challenge on sunny beaches around the world, we had to do it in the cold English summer.

It is often said that ALS is one of the most complex diseases to understand. Yet, you go to work every day to tackle the challenges of your research. What gives you hope that there will someday be a world without ALS?

People also have to understand that everyone in the field loves what they do. We are faced with daily challenges which we have to solve in creative ways. It seems more and more clear that we will probably not find a single molecule that cures ALS. It will have to be a combination of drugs and prevention.

What makes me hope that we will find an effective treatment is all of the smart researchers that are working on the problem and tackling it in very different ways, such as neuroimaging, genetic studies, generating mouse models, or just understanding basic neuronal biology.

What is something unique about you?

I think I am quite a lucky person. Throughout my life, I have found people that have supported me in everything that I wanted to achieve. I also think that I am very positive. It is hard to do this job and fail almost daily without a considerable amount of optimism and patience.

What do you like to do when you aren’t in the lab?

I am passionate about international politics and economics, so living in Washington D.C., is ideal. I also love to travel, and I try to go abroad at least twice a year in order to explore other cultures. I speak several other languages, so I like to use them when I travel.

Finally, I feel like scientists are seen as antisocial people that live in the lab by the general public. I am very interested in changing this false perception. In order to do so, I have joined a national association of Spanish researchers (ECUSA) which aims to promote science within the scientific community and the wider public. We host amazing speakers and go to schools in order to promote the cool science we carry out in the lab and inspire kids.

I’d like to thank The ALS Association, the Safenowitz family, and all the people that donate for trusting me and the lab with this grant. I’d also like to thank all of my scientific mentors who have helped me get to where I am, as well as my family, for their support.