May is ALS Awareness Month, Will You Help Us Create a World Without ALS? 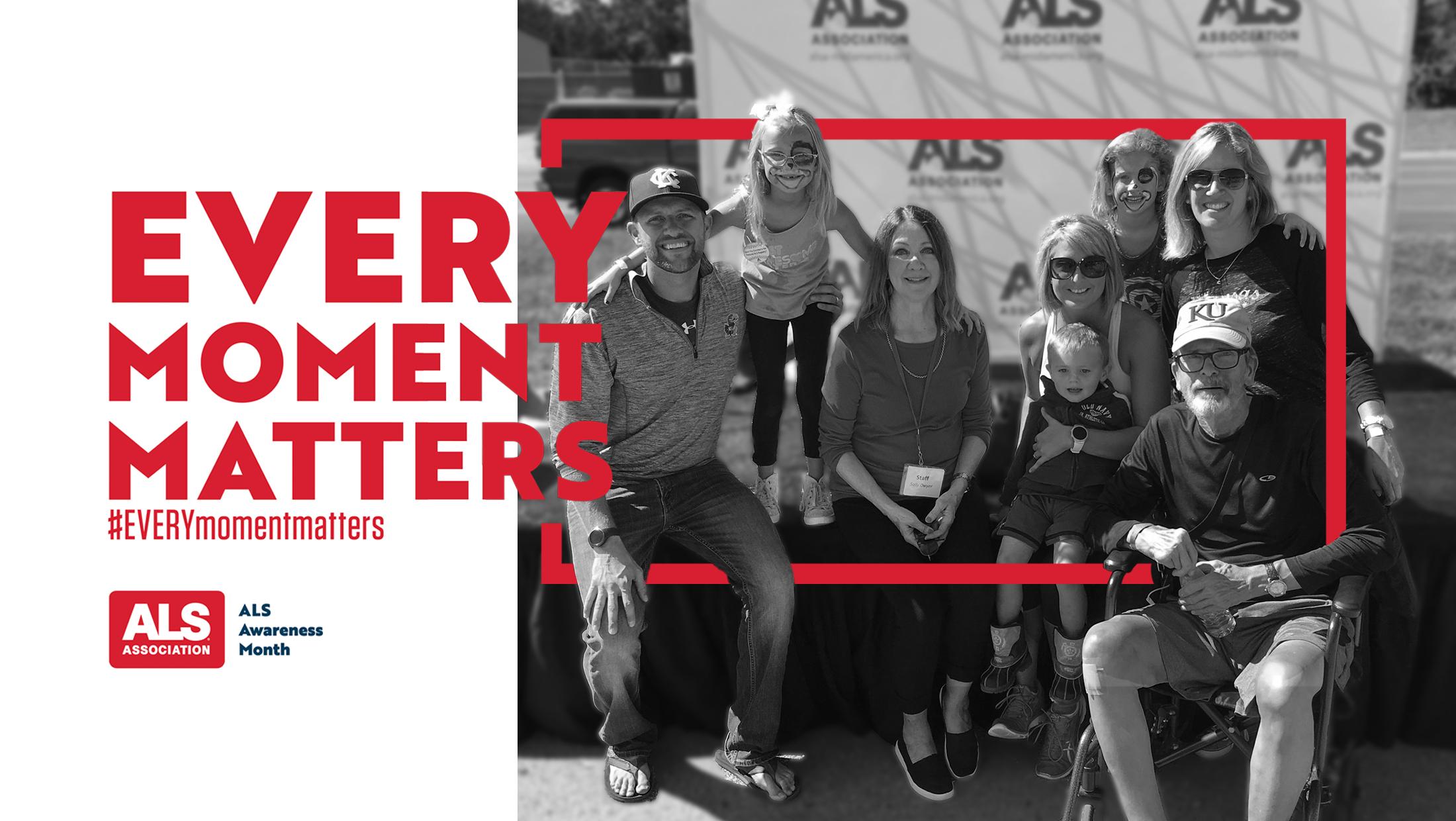 Saturday marks the first day of ALS Awareness Month, an opportunity for the ALS community to work together to educate people about this devastating disease and shine a spotlight on the impact ALS has on the families it touches. This May, our awareness efforts will highlight important milestones and those meaningful moments that people in the ALS community cherish, moments that bring joy and meaning.

Throughout the month we will be sharing personal stories from people within the community, and we encourage everyone to share them to help raise the critical awareness we need to put an end to ALS once and for all.

Our journey begins with Sally Dwyer. Sally is the Director of Mission Strategy & Integration for the Mid-America Chapter at The ALS Association. She has worked with the Association for 26 years and has experienced many moments and milestones throughout her career serving people impacted by ALS. Throughout her tenure, she says she has met many wonderful, caring, and courageous people, and has learned a great deal from some incredibly smart people. During this time, she has also witnessed many advances and changes that are helping to make a difference for people living with the disease.

Sally started with the chapter in care services in 1995, just 2 years after the first ALS gene, SOD1, was discovered. Since that time, researchers and scientists have discovered many more, now 43 in total, providing more promise and hope than ever before in the search for new treatments and a cure.

“When I first started this job, I was concerned that I didn’t have a direct or personal connection to ALS,” she said. “But it became personal as I got to know the individuals, caregivers and families we serve.” Since she started, she and the chapter have worked with over 3500 newly diagnosed people. “That fact is humbling to say the least. But also humbling is the fact that we have lost 2800 people to ALS in the same time period.”

Sally has also witnessed many advances in advocacy & public policy. In the early years, an Association advocacy focus was waiving the 24-month waiting period for people with ALS to receive Social Security and Medicare benefits. ALS became very personal to her as she worked alongside a gentleman on a campaign called Tuesdays Are ALS Days. “He was only 44 with a wife and three young children when he was diagnosed with ALS,” she recalls. “He used his intelligence and creativity serving on the Chapter’s Board of Directors, letter writing and visiting legislators to pass the waiver.” They, along with hundreds of advocates from across the country, gave the popular book, Tuesdays with Morrie, to every Senator and Representative (on a Tuesday) during the ALS Advocacy Conference that year. It took 4 years, but the bill was eventually signed into law in 2000. “It’s incredible to think that so many people over the past 21 years have benefited directly from the passage of that bill.”

Due to the continued advocacy efforts of the Association and many others throughout the ALS community, the 5-month waiting period waiver was finally signed into law December 2020. Sally sat on a committee that met with officials from the Social Security Administration to talk about implementation of this new 5-month waiver law. “My involvement in these two important legislative priorities came full circle 19 years apart,” she said.

These bills are only part of the advocacy efforts of The Association. Over the years, she says she’s been fortunate to have attended many ALS advocacy conferences and meetings to talk with legislators about the public policy priorities that directly benefit ALS research and those living with ALS. She’s learned that advocacy does and is work, and while it may take time, the benefits to ALS families are worth the work and the wait.

In the early 2000’s, Sally began hiring additional care services staff throughout the chapter service area – first in Kansas, then in Missouri and finally in Nebraska. Her team was growing, as was the number of people they served. They established their first ALS clinic partnership and certification 2001, followed by two more certified center partnerships and one affiliated clinic. “Our first certified center was just the 18th in the country, and part of a national program that now offers 3 levels of clinical care including 73 Certified Treatment Centers, 21 Recognized Treatment Centers and 94 Affiliated Clinics for a total of 188 ALS Association clinical partnerships throughout the country,” she says. “Incredible and important growth for sure!”

Throughout her time with the chapter, Sally has also learned that creating partnerships isn’t always easy and sometimes requires thinking outside of the box. In 2017, she and her team brought four distinct partners together in a telemedicine clinic structured with a virtual physician and local clinicians. This unique approach to providing clinical care in an underserved area won the chapter the 2018 ALS Association Innovation Award. “More importantly, it brought clinical care to an underserved population of people living with ALS in central Kansas,” she said. “Today, as a result of the pandemic, telemedicine is bringing clinical care to more and more of the ALS community, and this is a very good thing!”

Sally’s passion to help the ALS community and make a difference for those impacted by this disease shine through in everything she does. She is a true inspiration and is determined to do whatever it takes to help people living with ALS and their families. So, we ask that you please follow and share our stories and news this month and help us spread the word about the urgent need to end ALS.

Special thanks to Sally Dwyer and The ALS Association Mid-America Chapter for allowing us to share her inspiring story.

This month only all gifts to the ALS Association will be doubled – up to $25,000 – thanks to a generous match from Philips Respironics! Please, double your impact and donate now.

I am an ALS patient and have been for the last 21/2 years. I am retired and will send a gift to the local ALS association.