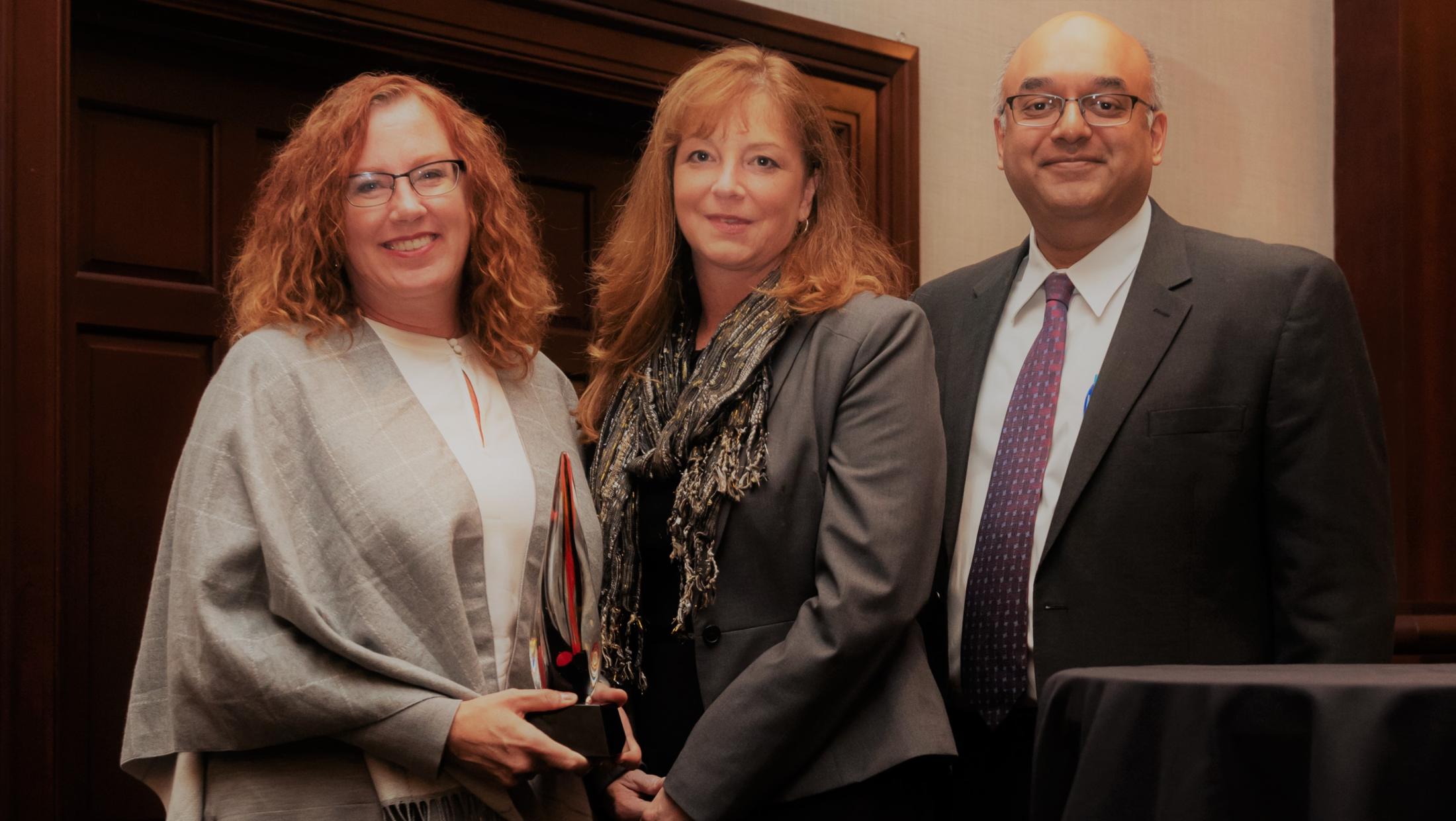 At our most recent clinical conference, we honored Frances (Fran) McClellan with the Lawrence A. Rand Prize.

The award recognizes the courage, passion, integrity, and commitment of people serving the ALS community as volunteers, health care professionals, educators, communicators, or in other ways contributing to the quality of life of people living with ALS. It was established by Lawrence Rand, a former chairman of the Association’s Board of Trustees who played a major role in laying the cornerstone of what is now The ALS Association.

Fran is a passionate advocate and provider for people living with ALS. She serves the ALS community as both a nurse coordinator for our Certified Center of Excellence at the Louis Stokes Cleveland VA Medical Center (Cleveland VAMC) and a board member for our Northern Ohio Chapter.

Keep reading to learn more about Fran and the work she does in the fight against ALS.

“I’m very honored to receive this [Lawrence A. Rand Prize] award,” Fran said. “Caring for people with ALS and their families is a complex process that doesn’t occur in isolation. Our large interdisciplinary team at Cleveland VAMC tirelessly, professionally, and compassionately cares for veterans with ALS. Without their efforts, it wouldn’t be possible for me to have established the programs we have for ALS care.”

She continued, “The leadership and compassion from Dr. Stephen Selkirk, the director of our ALS center, is unmatched. And The ALS Association provides such dedicated support of the VA and its mission to improve care for veterans with this terrible disease. Also, the people at [The ALS Association] Northern Ohio Chapter – including Mary Wheelock, executive director; Lisa Bruening, director of care services; and Cassi Veres, care services coordinator – who assist in screening for veterans are invaluable to getting people into the VA system and providing the care they desperately need.”

Following the designation of ALS as a 100 percent service-connected disability in 2008, the Department of Veterans Affairs (VA) experienced an influx of ALS patients needing a high level of specialty care. At that time, Dr. Robert Ruff, past director of neurology for the VA, envisioned a distributed network of centers with expertise in managing ALS. Fran collaborated with Dr. Ruff on a “mini-residency” program to build such teams across the U.S.

Dr. Ruff and Fran traveled the country to educate VA clinicians about ALS program development and the initial steps toward establishing a network. Following Dr. Ruff’s retirement, Fran continued to work on this national system of care and was the driving force behind the VA’s first Certified Treatment Center of Excellence, as designated by The ALS Association.

Fran continues to establish a national provider system within the VA and is coordinating efforts to ensure programs meet care standards as established through the American Academy of Neurology (AAN), in collaboration with the Paralyzed Veterans of America (PVA) and other ALS organizations.

She has also been a leader in the application of telemedicine for the care of veterans living with ALS. She has consulted with remote VA clinics in West Virginia, Pennsylvania, and rural Ohio to help veterans who have no access to multidisciplinary care. The framework she has developed in Cleveland has become one of the potential models for a national system of care.

Fran has also taken a leadership role in educating clinicians. She and Dr. Ruff established a series of national webinars on ALS care-related topics, and she has shared her experiences with VA Centers and detailed the innovative system of care in peer-reviewed literature. She has also been an active presenter at The ALS Association and PVA meetings.

“The Association’s success is directly attributable to leaders like Fran who work on behalf of people with ALS and their families and caregivers, and inspire others to do so as well,” said Dr. Neil Thakur, executive vice president of mission strategy for The ALS Association, who introduced Fran at the awards ceremony at the Clinical Conference. “We’re grateful to Fran and privileged to publicly acknowledge her through the Lawrence A. Rand Prize.”