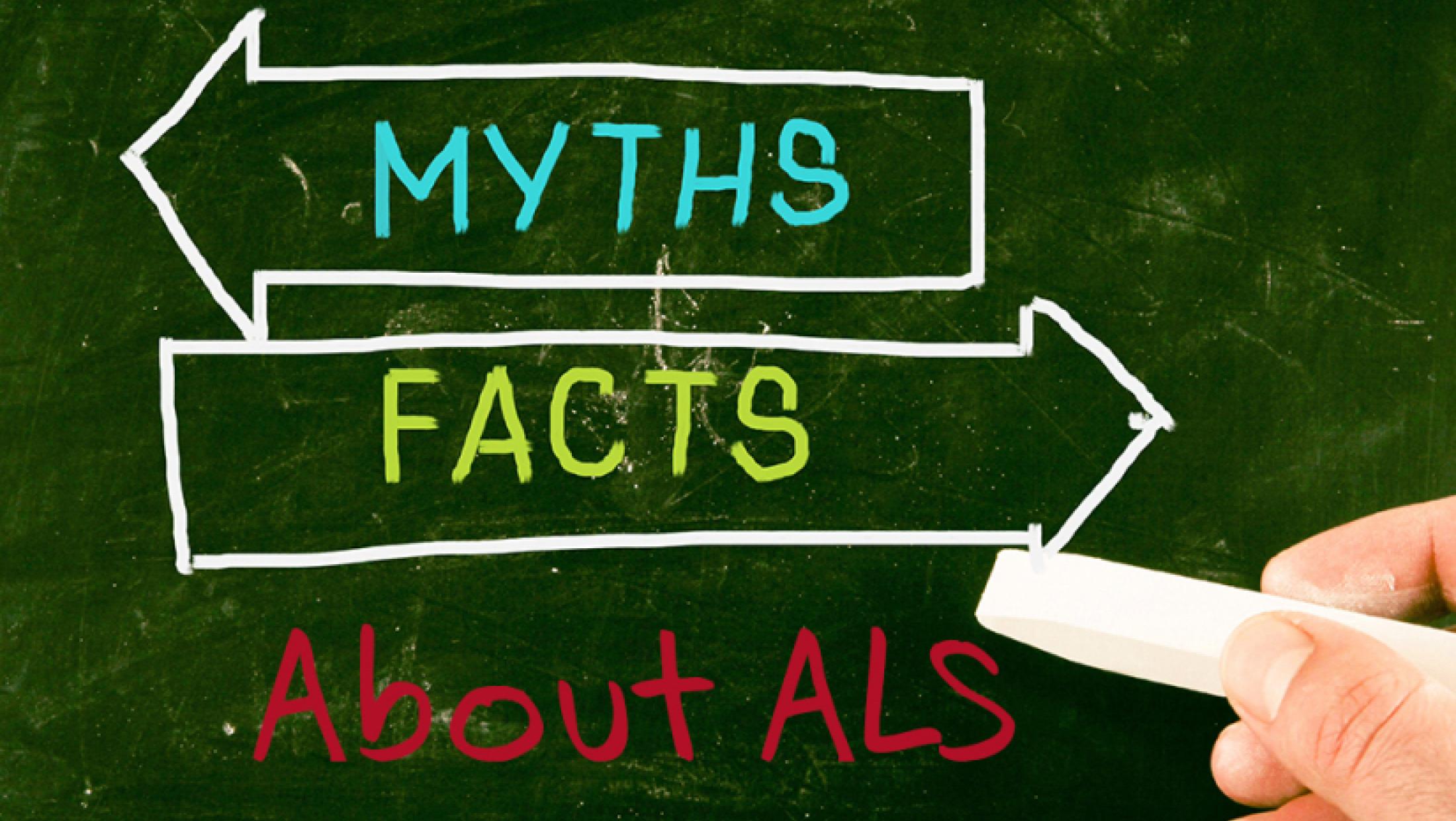 While recent years have brought a wealth of new scientific understanding regarding the physiology of ALS, there is still some mystery and misinformation surrounding the disease.

Below we break down five of the most common misconceptions about ALS.

In reality, the majority of people diagnosed with ALS have no family history of the disease. About 90 percent of ALS cases are sporadic, meaning the cause or causes are unknown. The remaining 10 percent of ALS cases are familial and inherited through a mutated gene. In those families, there is a 50% chance that each offspring will inherit the gene mutation and may develop the disease.

There are several research studies – past and present – investigating possible risk factors that may be associated with ALS. More work is needed to conclusively determine what genetics and/or environment factors contribute to developing ALS. It is known, however, that military veterans are approximately twice as likely to develop ALS.

2. Only older people are affected by ALS.

Most people who develop ALS are between the ages of 40 and 70, with an average onset of 55.  But there are many cases of people in their twenties and thirties who have been diagnosed with ALS.  This “young onset” ALS typically refers to people younger than 45 years old and accounts for about 10% of all cases.

Although the life expectancy of a person with ALS averages about two to five years from the time of diagnosis, the disease is variable. Many people can live with the disease for five years or longer. In fact, more than half of all people with ALS live more than three years after diagnosis.

3. ALS does not affect brain function.

While not common, approximately 20% of individuals with ALS also develop frontotemporal degeneration (FTD) which is characterized by changes in personality, behavior and speech.  Another rare form of ALS, known as ALS-parkinsonism-dementia complex (ALS-PDC) is characterized by signs and symptoms of ALS in addition to movement abnormalities (slow movements, stiffness and tremors) and loss of intellectual function. Cognitive and behavioral impairment in ALS can vary widely from individual to individual.

4. Muscle loss and paralysis caused by ALS means you can’t feel pain or experience other sensations.

People with ALS, even at an advanced stage, can still see, hear, smell, and feel touch. The nerves that carry feelings of hot, cold, pain, pressure, or even being tickled, are not affected by ALS. ALS is a disease that affects the parts of the nervous system that control voluntary muscle movement. Involuntary muscles, those that control the heart, GI tract, bowel and bladder function, and sexual functions are not directly affected by ALS.

5. ALS affects everyone the same way.

From the initial symptoms to how the disease progresses, ALS can affect people very differently.  In fact, no two individuals present exactly the same. Some people’s disease progresses very slowly, while others have changes that happen more quickly. Some individuals have severe involvement in one area before the disease spreads, while others experience rapid progression throughout their body. Some people may have severe weakness of one area, but little in others (e.g., unable to swallow but still able to walk and drive), and still others may demonstrate a similar severity of involvement of different areas.

Eventually, ALS takes away the ability to walk, dress, write, speak, swallow, and breathe. How fast and in what order this occurs is very different from person to person.

ALS is a complex disease. For more detailed information about ALS, and the programs and services available to help people with ALS live a fuller life with the disease, please visit alsa.org.

My dear friend Russ Newton has been battling ALS for 2 years. I am getting more involved in his care even though we live in different states. The is an incredible organization. Your website is absolutely remarkable with all the information that it offers. Thank you!

I’m scared! Jerks, twitches and cramps started suddenly 15 days ago. 3 days ago I noticed saliva building up on my mouth that I’m not able to fully swallow. The earliest appointment I could get with a Neurologist is in July. Any suggestions in the meantime. Thank you.

Hi Frank. So sorry to hear that you are having these health issues. Your local chapter of The ALS Association can provide you with more information about ALS and recommendations for clinics and specialists in your area. You can find their contact information at als.org/chapters.

why does mys ons trach gurggle. what does it mean ? is it dangerous?

i ve had 3 friends go thru this. ive been thinking about this for 6 decades...seems to me als is latent polio...like measles becomes latent and after hiding inside nerve sheaths it comes out slowly killing the nerves its hiding in. similar to herpes.

A little over 4-months ago, I went for a run and started having tingling in my feet that developed into pain so severe that it became very difficult to walk. I saw a podiatrist he said it may be plantar fasciitis and Tarsal Tunnel. Some of the symptoms spread to my leg and he referred me to a neurologist. I also began to develop back and neck pain and was referred by my primary care to a neurosurgeon. The neurosurgeon ruled out any issues in my cervical and/or lumbar spine. The neurologist did a EMR on my lower extremities and ruled out Tarsal tunnel or neuropathy. I'm very nervous because I now have shooting pains into my fingers, hands as well as tingling sensations. I also experienced muscle weakness that comes and goes in my neck and now my legs. Still seeing the neurologist but still not getting any answers. So many of my symptoms seem consistent with ALS but there are also others that do not. The really confusing part is that ALS presents differently in everyone so I'm not sure where I stand.