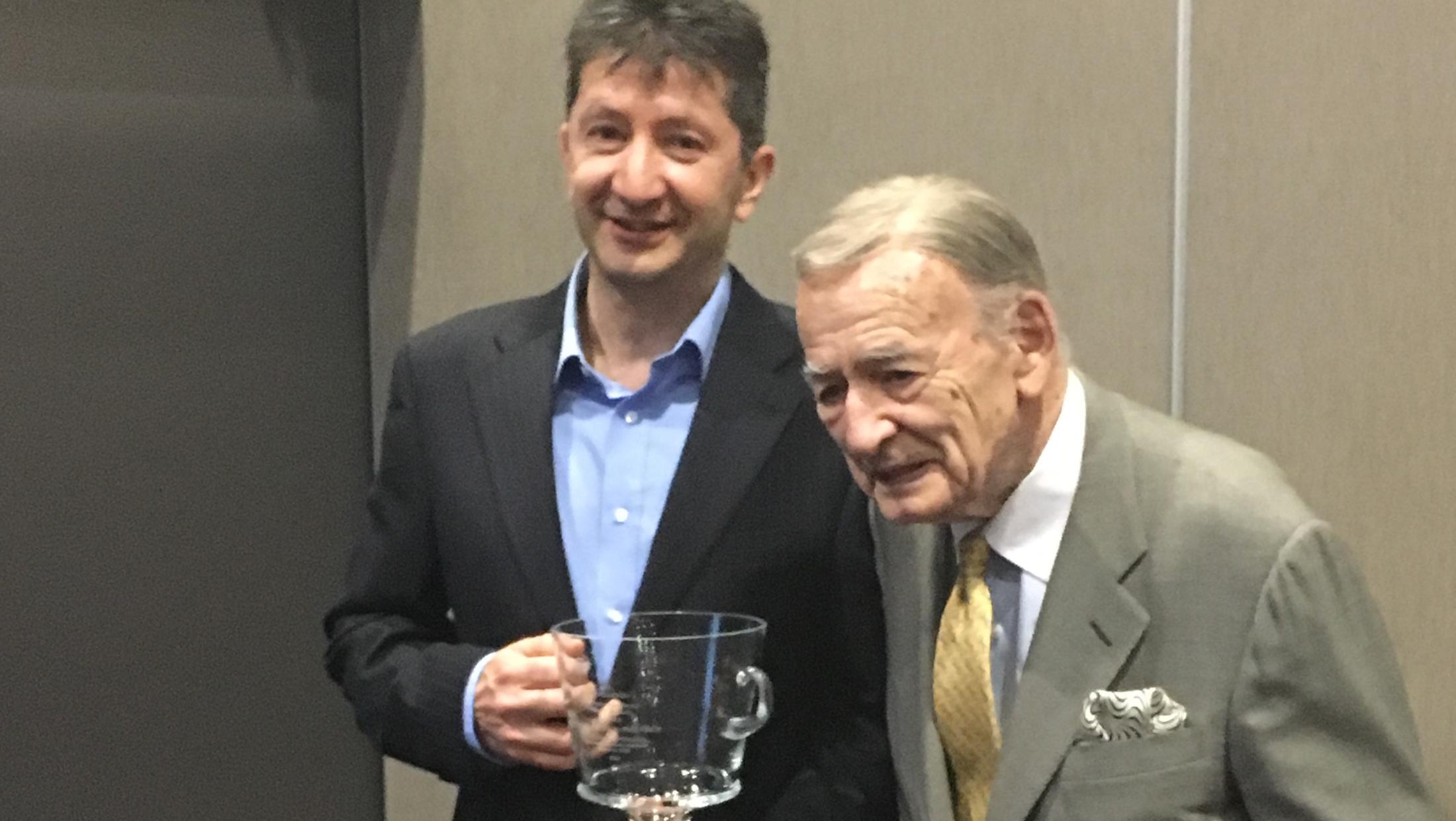 Since 1996, the Sheila Essey Award for ALS Research has been presented by Dick Essey at the American Academy of Neurology Annual Meeting, in memory of his wife Sheila, who battled ALS for 10 years and passed in 2004. This year, the award was presented to Ammar Al-Chalabi, Ph.D., FRCP, DipStat from King’s College London. Find out how Dr. Al-Chalabi’s work is driving progress in ALS research forward.

This year, The ALS Association and the American Academy of Neurology (AAN) were very pleased to honor Dr. Ammar Al-Chalabi with the Sheila Essey Award for ALS Research for his major contributions to the understanding of ALS and the search for new therapies to treat the disease. Dr. Al-Chalabi was presented the 2016 Sheila Essey Award by Dick Essey at the 68th AAN Annual Meeting in Vancouver, B.C. on April 20, 2016. The $50,000 prize was given to fuel his promising ALS research projects and to fund talented young scientists on his research team.

Dr. Al-Chalabi is currently Professor of Neurology and Complex Disease Genetics at King’s College London and Director of King’s MND Care and Research Center. He has made significant contributions to the ALS field. Dr. Al-Chalabi helped identify many known genetic causes of ALS, including C9orf72; developed the ALSoD database, an important tool for researchers funded by The ALS Association, MNDA UK and Therapy Alliance; and has made significant contributions to understanding disease staging, which impacts ALS care and clinical trial design. For more information regarding his illustrious research career click here.

When hearing exciting news that he was this year’s Essey award recipient, Dr. Al-Chalabi stated, “I am very honored to receive the Sheila Essey Award, and I am grateful to my research team and colleagues who make our ALS research possible.”

After receiving the award, Dr. Al-Chalabi presented a talk titled, “The Genetic Nature of ALS,” that elegantly summarized the progress researchers have made in ALS genetics since the discovery of the first familial cause of ALS, mutations in superoxide dismutase 1 (SOD1).

As explained by Dr. Al-Chalabi, progress in ALS genetics is advancing rapidly. The number of ALS genes discovered has doubled every four years, and he expects the total number to reach 35 in the next four years. This is due to better technology and bigger sample sizes as well as multiple international whole-genome sequencing efforts that read the gene sequences of thousands of people living with ALS.

“ALS genetics is advancing rapidly and understanding more about the genes involved will allow us to develop new therapies.” - Dr. Al-Chalabi

Dr. Al-Chalabi also argued that the distinction between sporadic ALS (ALS that strikes a person without a family history of the disease) and familial ALS (ALS that is genetically inherited) is artificial, as explained by a number of factors.

First, sporadic ALS has a genetic component that can be explained by undiscovered rare gene variants. Smaller family sizes provide fewer opportunities for someone to be affected by ALS, making it more likely that cases are classified as sporadic. Additionally, genes that are moderately penetrant (meaning only sometimes a gene mutation causes symptoms) may contribute to sporadic ALS.

Dr. Al-Chalabi is confident that advances in technology will lead to the discovery of more genes that could explain current sporadic ALS cases. These new findings will further the understanding of ALS disease mechanisms, leading researchers to new ALS treatments and cures in the near future.

During the AAN Meeting, two past recipients of the Sheila Essey Award, Dr. Rosa Rademakers, Ph.D., from the Mayo Clinic, Jacksonville, Fla., and Bryan Traynor, M.D., Ph.D., from the National Institute of Aging, Bethesda, Md., were honored with the Potamkin Prize for Research. Both Dr. Rademakers and Dr. Traynor and their teams co-discovered the C9orf72 mutation. It was the first time a large repeat expansion was found to cause ALS.

After receiving his prize, Dr. Traynor spoke about the journey that led he and Dr. Rademakers to the discovery of the C9orf72 mutation. His team found the mutation from studying a homogeneous Finnish population, while Dr. Rademakers studied a multigenerational ALS family in North America. Both studies were published back to back in the top-tiered journal Neuron in 2011.

Now, it is known that C9orf72 is the most common cause of familial ALS (approximately 40 percent of cases) and also contributes to a small percentage of sporadic ALS cases (approximately 7 to 8 percent). He also expressed hope for targeting the C9orf72 mutation with antisense oligonucleotide (ASO) therapy to limit ALS disease. Development for ASO therapies is currently underway at multiple academic labs in partnership Biogen and Ionis Pharmaceuticals.

A History of Achievement

The Sheila Essey Award is made possible through the generosity of the Essey Family Fund through The ALS Association Golden West Chapter. The award was created in memory of Sheila Essey, who battled ALS for 10 years and died in 2004. Richard Essey, Sheila's husband, served as a National Trustee of The ALS Association and is one of the founders of the Greater Bay Area Chapter, now the Golden West Chapter.

This year, Dr. Al-Chalabi joins a long list of Sheila Essey Award recipients who are prominent scientists that have made significant contributions to all avenues of ALS research. Here is just a small sampling of their contributions:

Learn more about the exciting work Shiela Essey Awardees have contributed to accelerate the pathway to a treatment for ALS.