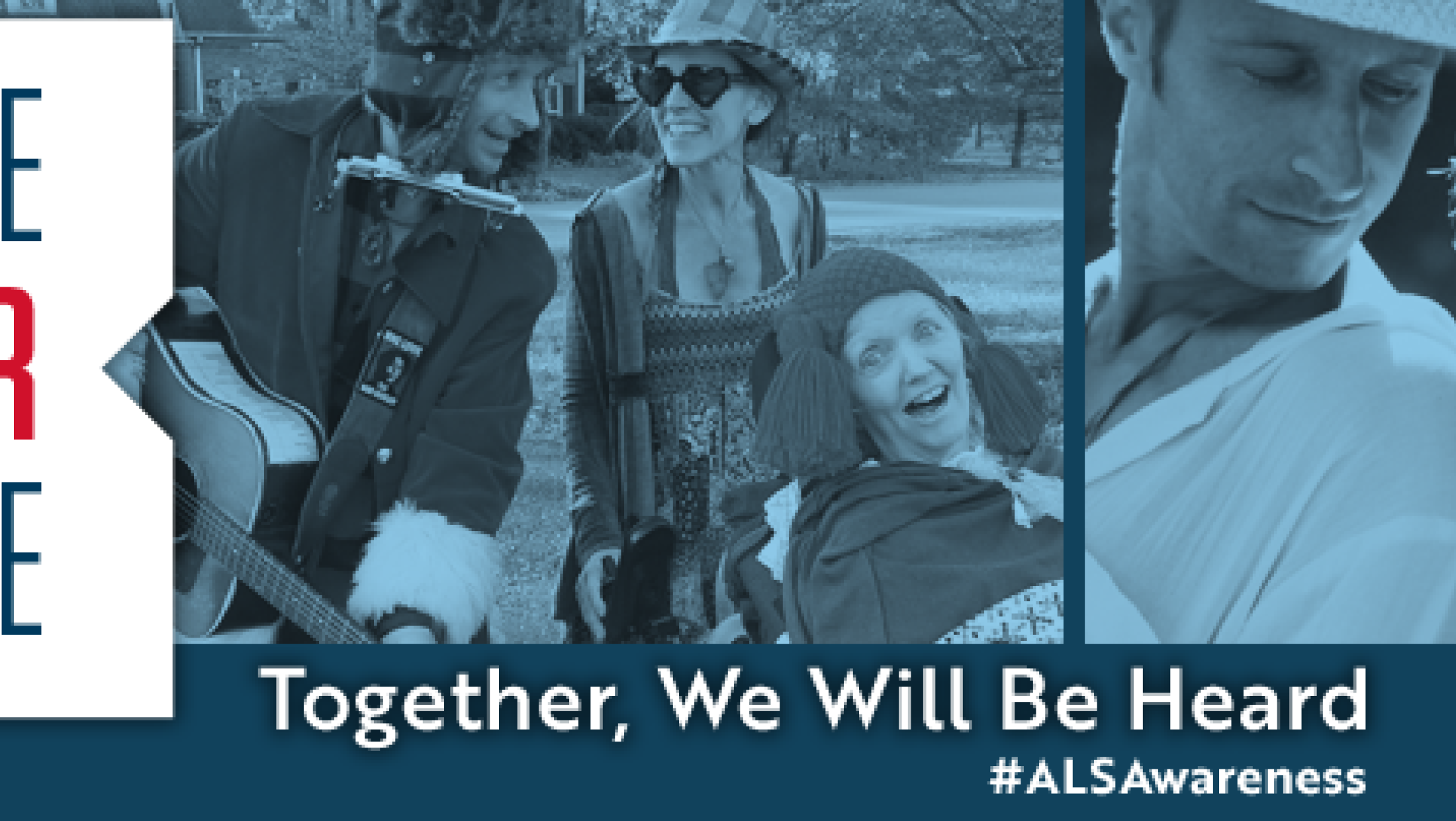 In recognition of ALS Awareness Month, we’ve been sharing a lot of new stories about people living with the disease and their caregivers, the volunteers and health care providers who help make the lives of people with ALS better, the powerful fundraisers and the participants in Walk to Defeat ALS and Team Challenge ALS events, and the researchers fighting for a cure. This is the 11th profile in that series.

"Two souls from far away met in the middle of Tennessee. Dawn came over from Seattle to Nashville [in] September 2004, after her song, ‘In the Moment,’ went to Number 35 on the New Music Weekly Country charts. Nash came down from Quebec with a group of musical guys known as Emerson Drive. They found each other at a co-writing session. Stars, dragonflies, butterflies, renaissance […] oh my, there was love in their eyes."

We recently talked to Dawn about how helping people with ALS – and especially their special friend, Ann – makes her and Nash’s lives richer and their music sweeter.

What is your connection to ALS?

In August 2014, we were challenged to do the [ALS] Ice Bucket Challenge by our musician friends here in Nashville. We had heard of Lou Gehrig's disease but really had no deep understanding of it. After the Challenge, we researched […] and were shocked at what we found out.

Besides working on our music, we were spending many hours helping others during this time of our life, whether it was the homeless, people with cancer, or [people needing help with] diet/nutritional issues. We wondered if food choices could help people with ALS.

A few months later, we were playing a show and the owner that night was very persistent in trying to get a friend in the music industry to come see our performance. She texted and called him almost a dozen times. He drove over an hour and arrived as we were finishing our show.

He seemed utterly exhausted when he introduced himself and simply said; “Sorry I’m late. My wife has ALS and is dying in the hospital.”

He went on to explain that her family had been visiting and saying their goodbyes for weeks and that the doctors said that she was out of options and time.

Two days later, [Nash and I] went to meet his wife, Ann Gillis, at the hospital in Nashville. She was now 98 pounds [and] emaciated, and Nash walked right up to her and looked into her frightened blue eyes and whispered, “We’re gonna get you outta here.”

During our second visit to the hospital, Ann typed on her phone, “I’m from Nova Scotia.” This was the moment we [realized] we’d met a few years before at one of our very first shows at the legendary Puckett's in Leiper's Fork, Tenn.

I had joked that my husband was a Canadian and, from the back of the crowd, Ann shouted, “I’m from Nova Scotia.”

This instant connection began our journey down a new path. We moved away from helping the homeless and dedicated our lives to becoming caregivers for a person with ALS.

We’ve now worked with Ann and her husband for three-and-a-half years. After realizing taking care of Ann was becoming a full-time job, and [her husband] literally needs to work around the clock due to the demands in the music and TV industry; Ann and I talked about us moving in to help alleviate some of the pressure.

Nash and I moved in a year ago. We developed systems to make life easier on Ann and her husband, which included hiring more help and setting her diet plan and a schedule to keep everybody on track.

Nash and I have so much empathy for Ann and her husband’s journey with ALS, and we believe true love is about giving unconditionally and not expecting anything in return. It’s beautiful to witness the unconditional love between the two of them.

It may sound corny, but we have found that the more you love and give of yourself unconditionally, the more blessings are poured out unto you and those around you.

Tell me about your music and how you use it to bring awareness to ALS.

[Nash and I] try to be very mindful of the world around us, and we love to talk and write about the way people act and treat one another. Our songs are often just a simple conversation between the two of us about love, life, people, and hope. Dawn Loves Nash makes happy, meaningful music with warm harmonies, bringing hope to the hopeless through a positive message.

Caring for a person with ALS brings a whole new look at life. [We started] writing more songs about inner strength and motivational thoughts. We wrote one song for Ann called “Hey Little Annie” with a simple message – to remind her “miracles happen every day.”

“Hey Little Annie” was recorded last year in collaboration with Chinese artist Ting as a cross-cultural promotion between the U.S. and China and will be released worldwide in the future. All proceeds will be gifted to The ALS Association Nashville Chapter to help their efforts to raise awareness and support.

How have you worked with The ALS Association to raise awareness and funds to fight ALS?

With our new understanding of ALS [came] an intense passion to spread the message to give back more and to help raise awareness of what we’d been experiencing.

A few years ago, we were invited to sing at the WALK4ALS [now Walk to Defeat ALS] in Nashville. So, we volunteered our voices and music for the cause. We have a great network of music industry friends who were willing to help us get this message out, so we called on a few of them.

Together we created Let’s Rock ALS, kicking off our first ALS benefit concert and auction on September 28, 2016. We were able to raise almost $4,000 dollars [for] the Association’s Tennessee Chapter.

We continue to offer our voices and music for any event needing us to help spread the message of hope for [people living with] ALS. What’s most amazing and has inspired us the most about volunteering at the Walks and Shine for Susie events, or even [hosting] our own events, is the support we’ve witnessed from those whose loved ones have already passed but continue to give their time to help others.

It’s inspiring to be part of an amazing group of people who passionately want to help raise awareness.

“Raise Your Voice” has been the theme for ALS Awareness Month 2018. What is your perspective on people raising their voices to fight for an end to ALS?

After more than three years of working in the trenches with ALS, the slogan “Raise Your Voice” brings to mind both the painful reality of losing one’s voice because of ALS [and] the massive impact brought on by the Ice Bucket Challenge and by people raising their voices together to raise awareness.

What better call to action than to “Raise Your Voice,” share your stories and experiences, and remember to listen with an open heart. We can learn so much from one another.

What would you say to someone newly diagnosed with ALS?

This is not hopeless. It’ll take strength to stay the course. And you need help, so don’t try to go it alone.

Call on your friends and family. Get proactive, and since the medical community has limited options, don’t be afraid to try alternative, natural ways for healing.

Ann’s story is inspiring. She was told she wouldn’t make it out of the hospital alive, let alone live past six months. With some research, we found a great organic feeding tube formula from Functional Formularies called Liquid Hope.

Three days after starting the new formula, Ann started making huge improvements and ended up walking out of the hospital. (Although she was diagnosed in January 2015, her symptoms began as far back as 2010. She continues to fight the disease to this day.)

So, don’t give up and don’t give in. People are amazing and love and support from family, friends, and extended “families,” such as [people from your] church, synagogue, or local Association chapter, can make a major difference.

What do you want to say to the people reading this article?

When watching someone’s progression into helplessness – whether as a loving spouse, a friend, a family member, or a hired caregiver – the feeling of helplessness catches up to the best of us. There are currently 43 million unpaid caregivers in the U.S., such as friends and family members, and ALS-related Facebook groups show people are finding it hard just to make it through.

Small, local support groups, like the monthly gathering at The ALS Association Nashville Chapter, help people share their experiences and support each other by raising their voices in a safe and friendly environment.

People with ALS have become a true inspiration to us. So many people give up on trivial things, but the people [we’ve] met who are living with ALS have taught [us] that you need to “live more, love more, and do more,” inspiring us to write, perform, and sing songs that hopefully have an everlasting positive impact.