Bringing Our Fight to Capitol Hill

On June 22, we led delegations of advocates in a full day of virtual congressional meetings to push Congress to support and pass critical legislation that will help the ALS community, including funding for ALS research and making expanded access to telehealth permanent -- 320 ALS Association staff and ALS advocates from 46 states shared their personal stories and experience living with ALS with more than 300 members of Congress and their staff.

The meetings come on the heels of our annual Advocacy Conference – held virtually due to visitor restrictions in Congress.

Throughout the conference, nationally recognized ALS experts shared the latest research on ALS, the value of multidisciplinary care, the importance of early detection and nutrition, and innovations to improve the quality of life for people living with ALS. Speakers included Dr. Michael Benatar, Dr. Richard Bedlack, Dr. Terry Heiman-Patterson, and Dr. Sabrina Paganoni. 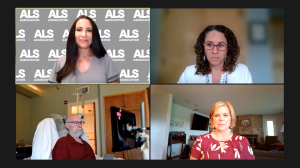 On the state advocacy front, State Senator David Tomassoni, who had served in the Minnesota State Senate since 1992 but recently retired due to his ALS diagnosis, and State Representative Anne Neu Brindley, who lost her husband to ALS in 2016, spoke about their successful effort to secure $20 million for research and $5 million for care services. Marianne Kuhn, who led our work getting bill passed and signed into law, shared how people with ALS and their families worked with these legislative leaders to push the bill through. She noted that work continues to influence the state agencies responsible for spending those dollars.

Congressional presentations included a discussion between ALS champion, Congresswoman Anna Eshoo (D-CA-18), and Scott Kauffman, Chair of The ALS Association Board of Trustees, about the power of advocacy, the drug approval process, and the significance of the passage of the Accelerating Critical Therapies Act for ALS. Please visit the campaign in our Advocacy Action Center to urge your members of Congress to increase investments in ALS research. Also speaking was ALS champion Congresswoman Jan Schakowsky (D-IL-9) who spoke passionately about how people with ALS continue to inspire her work on the Hill.  Other members of Congress who spoke included Congressmen Mike Gallagher (R-WI-8), Rodney Davis (R-IL-13), Brian Fitzpatrick (R-PA-1), Ken Calvert (R-CA-42), and Jason Crow (D-CO-6) who are working with colleagues on the Hill to advance ALS priority issues.

The virtual discussions of public policy and advocacy included 575 unique attendees. Recordings of the conference will be posted as soon as possible. For more information about this year’s conference, visit ALSAdvocacyConf.org.

Please approve this drug in the us! Patients need this to improve their quality of life. My mom passed away from Als in 2016. There should be a cure for this horrible disease by now.

This drug is long overdue. I lost my husband to ALS in 2014. I watched him suffer. I’ve hoped for a medical break through so other families won’t have to go through what we went through. Although this is not a cure it’s a step in the right direction.

So sorry for your loss, Jennifer and Kim.