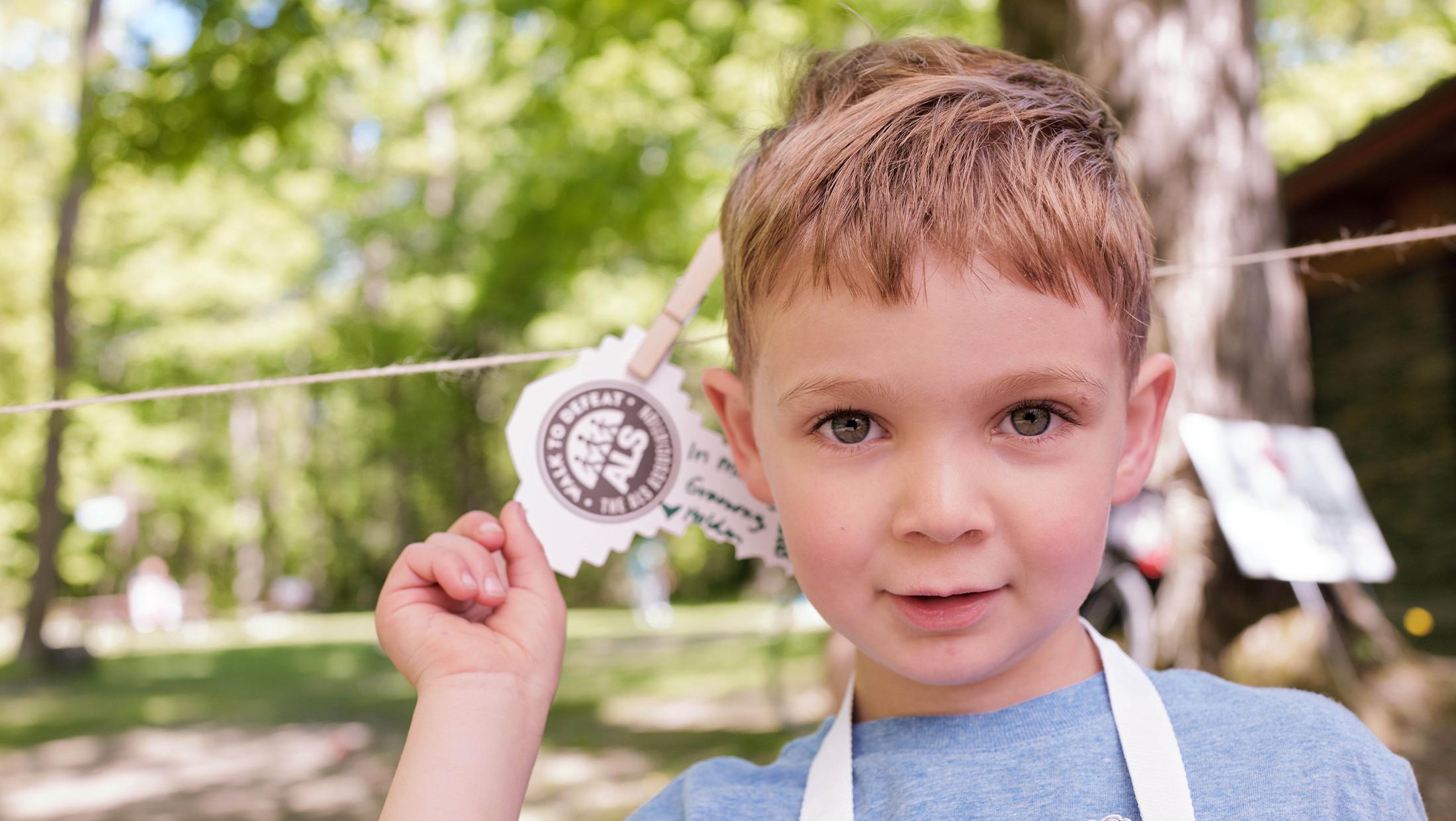 To help empower kids in the fight against ALS, The ALS Association is celebrating the third annual ALS Youth Action Day on Saturday, May 15. It’s a day where kids across the country can take the ALS Youth Challenge and use the power of their creativity to help raise awareness and critical funds that help researchers around the world look for treatments and a cure while enabling people with ALS to live longer, higher quality lives.

In a recent Connecting ALS podcast, we caught up with Rebecca Wetzel, an educator, philanthropist and mother of two, who partnered with The ALS Association to launch the ALS Youth Challenge in 2019. Rebecca shared the inspiration behind the Youth Challenge, a unique virtual opportunity for kids to get involved in 2021, and how the Youth Challenge is empowering kids to raise awareness of ALS.

A portion of that conversation has been edited and condensed below.

I remember the very first ALS youth action day way back in 2019, I believe it was and the positive event that that was and the impact that it had. Can you remind our listeners where the original inspiration came from and why you and your family decided it was time to get more young people involved in the fight against ALS?
Sure, I'm taking a little journey with my history within six years old, and at that time I lost my grandfather to the disease. And if I think back to my six year old self, it was a while back but I can sort of remember, I remember being kind of confused at that time, why my grandfather couldn't pick me up and couldn't throw a ball with me anymore. And then when I was in my twenties, I unfortunately lost my father to the disease as well. And again, when I looked back, I remember feeling kind of helpless at that time, feeling like not a lot of people kind of understood what I was going through. And then about five years ago, my aunt was diagnosed with FTD, which, for anyone not sure what that is, it's a form of dementia, genetically linked to ALS. And when she was diagnosed, I started talking with my two young daughters and they wanted to do something to help.

So, they came up with the idea of having iced tea stands because they had experienced the ice bucket challenge and they kind of played off the idea of ice and they thought it would be great if they could have ice tea stands. So that's kind of where it all started and from watching my two young daughters, at that time they were four and six, be very engaged and enthusiastic about helping others, and just really loving the process of taking the steps to not only fundraise, but to really raise awareness for ALS. When they were out on main street, they had strangers coming up and asking them what ALS was, and they were able to just bring a whole new community into the fight. In fact, after that first iced tea stand, my older daughter told me at the end that it was better than Disney world because she was helping other people. So, I just thought if I could give that platform to other youth, what a great opportunity that would be for them. I'm also an educator, so I truly believe in the power and the potential of youth to be agents of change. So, given that background, I knew that I wanted to do something to help the youth within this ALS community.

Becky, obviously it was successful enough that that iced tea challenge was featured on the Today Show, and you were able to bring the iced tea stand to the halls of Congress and sell some iced tea over there. Talk to us a little bit about how it expanded from iced tea to multiple different ways that kids, that teenagers, that young people can engage in raising awareness and raising support for the fight against ALS.
The success was tremendous for the iced tea stands and that really spoke to just when you start anything within your communities and just start by asking for help, I think anyone will be amazed by how many people want to help out and want to get involved. Once I saw how many kids wanted to be involved, and some of these kids did not have any connection to ALS, they were people within the girl’s classes or within their girl Scouts, I really wanted to think expansively about how to expand it. So I came up with the idea for a bigger platform, which could tap into kids interest in different ways, because of course, if you're 13 or 14, you probably don't want to have an iced tea stand, or you may, but you might be more involved with your lacrosse team or you might be a runner and you want to hold a race.

I knew for my experience being an educator, of course, kids have a wide variety of interests, and I wanted to give them a platform which would allow them to tap into those interests and show them how they can take their interests and turn them into awareness or fundraising campaigns. Overall, through the whole process, I really wanted to keep the youth challenge focused on helping youth and helping youth who are going through this horrible, difficult time of ALS within their own families. And so I wanted the task that they would undertake with the youth challenge to really empower them so that as they chose an activity and they created these ideas, they would be taking the steps so that they'll feel empowered and so that the youth challenge would support youth, so that they would feel a sense of success. When I go back and think about my six-year-old self, I know that, or even my 20-year-old self, I often felt helpless against ALS.

It's been inspiring to see it grow the way that it has and see all of the creativity on display from the youth involved. And I liked that you touched on two elements, the feeling of helplessness and wanting to be part of a success in this fight as being so important. We hear that a lot from those involved and want to make a difference and feel like there's something tangible they can do that will help us create a world without ALS. And that's very much what Youth Action Day and these activities are bringing. What do you have planned for this year specifically, Becky, are there new and different things you're trying, or is it more still about letting the youth choose what works best for them and kind of seeing their ideas come to life?
We've had to pivot a little bit the last two years, of course, as everyone has had to do with COVID. And so, we've tried to take a lot of the events to be more virtual. My children, of course, couldn't do iced tea stands in the past year. We tried to do one online, and it kind of worked. The girls know that every 90 minutes someone's diagnosed with ALS, so last year we were able to do something with their school called the 90 for 90 Challenge. What we tried to do is have 90 of their friends sign up to do 90 acts of one activity. So, my older daughter did 90 free throws because she loves to play basketball. My younger daughter did 90 sit ups, which for her took a couple of different tries, but we got there. And then we sent that out over email, because we were all virtual at that time, and we had different girls from the school sign up to do different activities. Some did 90 cartwheels; some did 90 lacrosse shots on goal. It was just a different way to get the kids involved and to be aware of ALS.

I love the versatility in meeting kids where they are and allowing them to incorporate what they do and what they're passionate about into being a cause for change. Becky, you touched earlier on the opportunities for people who aren't necessarily, or who don't think of themselves as part of the ALS community, but expanding opportunities for them to get engaged. In addition to empowering people whose lives have been touched by ALS and as we're here talking during ALS Awareness Month, talk a little bit about the opportunities to take something like the Youth Challenge and bring ALS awareness to new audiences and new communities.
I think the Youth Challenge really lends itself to bringing visibility of ALS into a whole new community. For example, the girls asked their school if they could hold an event during one of the athletic teams, it was lacrosse the first year that we did it. During halftime, we played some games with the younger girls who came to the concession stand, we sold cookies that said ALS on them and we had signs that explained what ALS was. That expanded to the older girls who were playing in the lacrosse game and their parents and additionally to anyone who came from the school community. The iced tea stand, as I mentioned earlier, as you hold your iced tea stands with permission from your towns in different areas, you can have a whole new visibility to just people who are passing by and it will drive new people to know about ALS, but also you'll be amazed by the number of people who will come by and say, “I lost my uncle to ALS,” or “Oh my gosh, I lost my a friend to ALS a few years ago.”

And so you will get to meet other members of the community who might not be as involved with different nonprofits or with The ALS Association, but are still connected to the disease and want to be able to share their story and feel connected with you. That's so great.

To listen to the podcast episode "Engaging Kids in the Fight Against ALS…" with Rebecca Wetzel in its entirety, visit ConnectingALS.org HERE.

To learn more about The ALS Association’s ALS Youth Action Day and find ways you and your kids can get involved in the fight against ALS, visit als.org HERE.