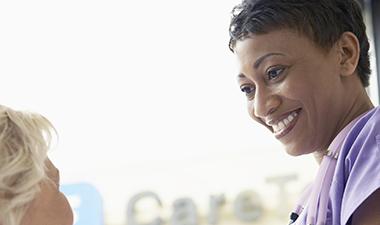 Clinical studies funded by The Association in the TREAT ALS™ research program include both clinical management projects that improve people’s lives in the present and clinical trials that hold promise in the future – for people living with ALS, caregivers and loved ones. Both are extremely important in the fight against ALS.

Grants are awarded to researchers that seek to improve the lives of people living with ALS, caregivers and loved ones without directly testing a drug. See below for examples and more information.

Clinical trials carry out tests on people to see whether a candidate therapy is safe and works to counter the effects of a disease. Before human patients are the subjects, therapy is tested in cells or tissue grown in the lab, and then in animals, to provide the best possible assurance that a drug will be safe for people to take. Motor neurons derived from induced pluripotent stem cells (iPSCs) also serve as model for disease that directly reflects a person’s genetic makeup in a dish. iPSCs are used both in preclinical studies and in clinical trials in parallel to the drug treatment.

Due to requirements for producing reliable data, patients may have to be of a certain age, gender, stage of disease or even race, to participate. People living with ALS participating in clinical trials are required to fulfill certain criteria of the disease or disease severity (“inclusion criteria”) and might be ineligible if they show certain other characteristics (“exclusion criteria”).

Clinical trials can only test relatively few patients and must make predictions from a few people that will most likely hold for the patient population as a whole. Statistics provide the means to judge if a change induced by drug treatment is likely to be a real, reproducible change and for doctors to understand whether observations in a restricted set of patients is likely to hold true for the entire population of patients with that disease.

The placebo effect is well known in medicine as a temporary improvement in pain or other symptoms of a disease that follows a fake treatment. It is a real effect. But it is not due to the active properties of a drug. So testing of any new treatment must ensure that the effect is due to the drug and not to the power of positive thinking or to the extra attention from the medical staff that comes with participation in a clinical trial. Simple hope that a new treatment will work can color expectations and perceptions. A participant’s speech can appear clearer. A person can gather strength to sit up unassisted or take a few steps unaided. Decline in abilities can slow or plateau. These are real effects of positive thinking. A control group helps to balance effects of the mind against effects of a drug.

The Association supports both clinical management grants in efforts to improve care for people living with ALS and clinical trials to accelerate treatments through the drug development pipeline.

Clinical management grants in our TREAT ALS™ research program are designed to improve clinical, psychological and social management of ALS. Studies funded by The Association include, but are not limited to, projects addressing gaps in the delivery of care, exploring and developing telemedicine practices, addressing the needs of caregivers, studying nutritional and respiratory approaches, addressing activities of daily living, alternative treatments and exploring psychological interventions to tackle stresses of living with ALS.

The Association supports clinical trials up to phase II, after academia partner with pharmaceutical/biotech companies to move the potential ALS compounds through the drug development pipeline. All available awards encourage collaboration between academic laboratories and industry. For example, through ALS ACT in partnership with ALS Finding a Cure® and Northeast ALS (NEALS) Consortium, we support a program to fund phase II clinical trial studies that are focused on the development of novel, high potential treatments for ALS that include biomarker studies. In addition, The Association’s TREAT ALS™ Drug Development Contract program supports pre-clinical assessment of ALS therapeutics, which are product driven. We also sponsor pilot clinical trial studies with a particular focus on biomarker development, optimization and validation.

The ALS Association places establishing and advancing standard in care for both people living with ALS and their caregivers at the forefront of our mission. Investing in clinical studies from clinical management grants designed to improve and enrich lives to clinical trials to lead to novel treatments and cures more rapidly are paramount in the fight to end ALS.

A person with ALS that participates in clinical trials is a hero. They give their precious time and could be exposed to possible hardships, even though it may be unlikely that they will not live to see its potential benefits, but know the trial could potentially help people in the future. In addition, even if a candidate fails to hold promise, the results of any clinical trial give new insight and direction to those working to solve the mysteries of ALS.