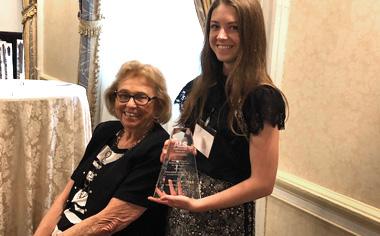 The ALS Association is proud to support the development of bright, new scientists through the Milton Safenowitz Postdoctoral Fellowship. The Safenowitz family, through the Greater New York Chapter of The ALS Association, founded the award in memory of Mr. Safenowitz, who died of ALS in 1998. These awards are to encourage and facilitate promising scientists to enter the ALS field. Fellows work with a senior mentor and receive extensive exposure to the ALS research community through meetings and presentations. After completing this fellowship, more than 76 percent of the awardees stay in ALS research. They go on to establish their own laboratories to continue studying ALS and mentor more ALS researchers along the way. The other 14 percent go on to careers in industry, non-profit, and medical writing with many still focusing on ALS.

Christine graduated Polytech Marseille with a degree in biotechnology engineering and completed her Ph.D. in neuroscience at the University of Strasbourg under the mentorship of Dr. Caroline Rouaux. During her doctoral studies, Christine explored the molecular pathways that selectively trigger corticospinal motor neurons (CSMN) dysfunction and degeneration during the course of ALS. She also improved the characterization of the ALS cortical pathology and developed a protocol that, for the first time, allowed the analyses of pure populations of CSMN isolated from the cerebral cortex of adult wild type and SOD1G86R mice at different stages of the disease. She has started her own lab at Harvard Medical School where her current project is entitled, “Unravelling shared molecular mechanisms in familial ALS”. Her goal is to identify shared cellular targets and pathways of genes related to familial ALS in iPSCs. Her targets are genes SOD1, TDP43, and PFN1.

Zhe received her Ph.D. degree in March 2018 from the University of Queensland in Australia. Her doctoral focus was on sulfate transporter regulated postnatal brain development and its correlation with autism. She is currently working in the Sun Lab at the Johns Hopkins School of Medicine. Her ALS research project is entitled, “Understanding repeat RNA transport and RAN translation in C9ORF72-ALS/FTD”. The goal of her work is to screen for genetic modifiers of aberrant C9 expansion and export from nucleus, as well as differences in neurons and glia.

Emily’s doctoral thesis was on dipeptide repeat proteins (DPRs) in C9orf72-linked ALS/FTD. Her focus was on how they are made through RAN translation and how they transmit between cells to propagate disease. Emily’s current project with the Rothstein Lab at Johns Hopkins University focuses on how the loss of a cortical astroglia subpopulation exacerbates dendritic and synaptic defects of upper motor neurons in ALS. The goal of her current work is to validate the astroglial protein norrin in human, mouse, and cellular models of ALS and Norrie disease.

Lauren received her Ph.D. at Iowa State University for her dissertation entitled, “The identification of developmental mechanisms and signatures of mature retinal neurons through single cell transcriptomics.” Her advisor was Dr. Jeff Trimarchi. Lauren is currently a neuroscientist at the University of Florida, where she works in the lab of Dr. Laura Ranum. Lauren’s research focuses on the development of novel therapeutics for the treatment of C9orf72 ALS/FTD and related repeat-associated disorders. The goal of her current work is to test the feasibility of using a vaccine antibody approach against C9orf72 in mice.

Paul earned a doctorate at the University of Toronto, which explored the molecular underpinnings of Alzheimer’s disease. Paul’s current project entitled, “Linking brain cell subtype-specific transcriptomic and epigenomic mosaicism in C9orf72-ALS/FTD” is being conducted in the Rogaeva lab at the Tanz Centre for Research in Neurodegenerative Diseases at the University of Toronto. Paul is leveraging novel single cell genomics tools to identify cell-specific alterations in transcriptome and epigenetic profiles in different brain regions from ALS and FTD patient tissue. The goal of his current work is to uncover the molecular programming which make individual brain cells and populations of cells susceptible or resilient to the disease process so that new therapeutic avenues can be developed for patients with ALS and FTD.

Valeria received her MSc in human biology and her Ph.D. in molecular and cellular biology from the University of Rome Tor Vergata. Her doctoral research concentrated on the functional interactions between FUS, a major gene implicated in the pathogenesis of ALS and SMN1, the causative factor of spinal muscular atrophy. She is currently working at Columbia University in the lab of Dr. Maniatis on a project entitled, “The cell autonomous and non-cell autonomous role of TBK1 in disease progression in a mouse model of ALS.” Her goal is to validate the autophagy protein TBK1 (tank binding kinase 1) in mouse model of ALS. TBK1, a key autophagy factor, is a cause of both familial and sporadic ALS.