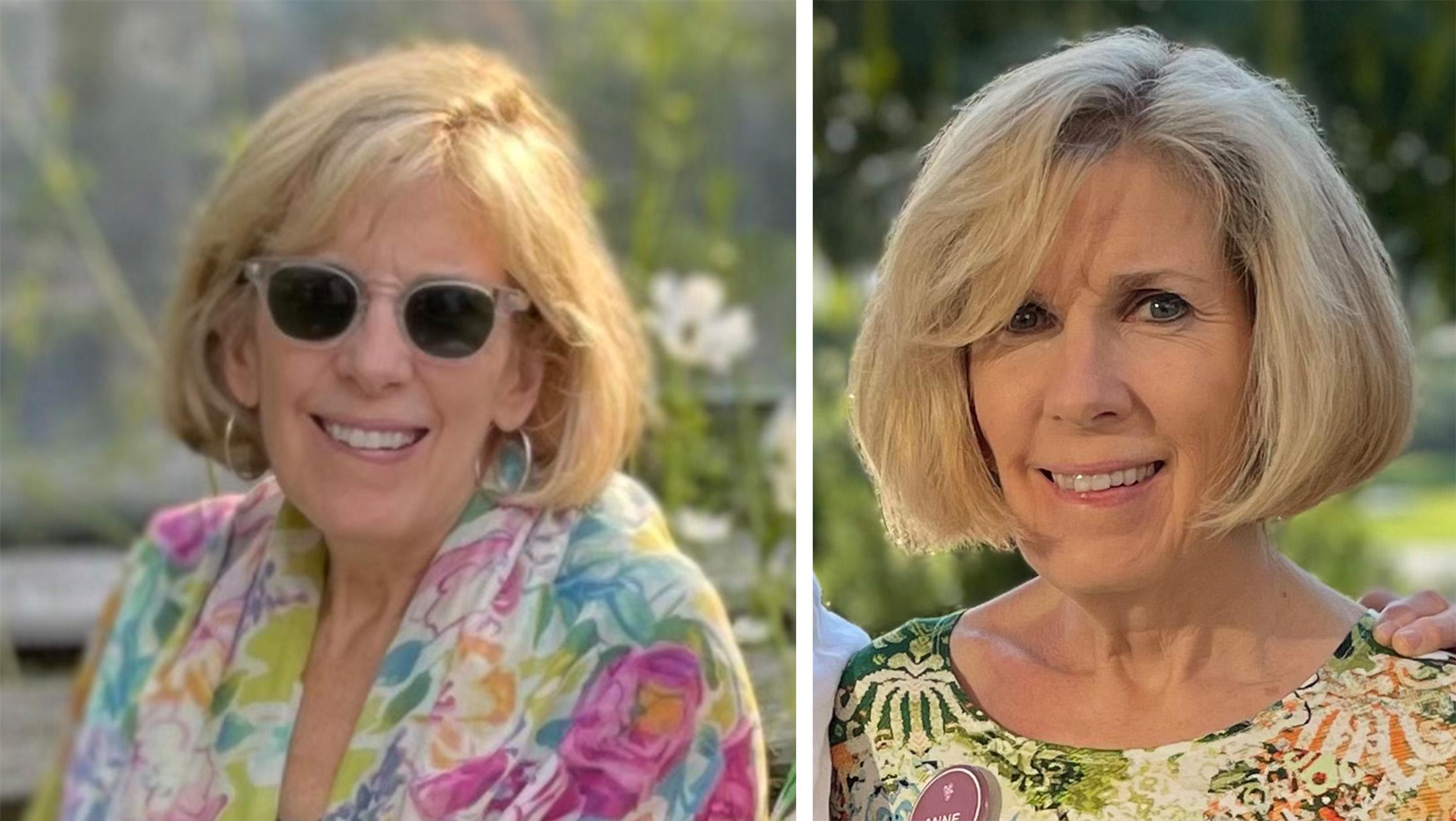 I grew up in the Midwest, in a suburb of Cleveland, but have lived most of my adulthood on the East Coast, in New York and now Princeton, New Jersey. I studied French at the University of Michigan, and graphic design at Pratt Institute. After an epic long-distance relationship (separated by school and work commitments), my high school sweetheart, Kevin, and I finally married. We have a son and a daughter, now in their 20s.

I have been very fortunate and extremely unlucky in my life.

In 2006 Kevin was killed in a car accident by a driver who was distracted by his cell phone. The gut-wrenching grief from that sudden tragedy was deeply debilitating. But I was lucky to have incredible support from my family and friends, and with time I have been able to heal, though of course still forever scarred. My personality by nature is optimistic, glass half-full, calm. Eventually I realized that for me, however understandable, wallowing in despair only makes my day-to-day that much worse.

I have bulbar-onset ALS. My symptoms began in the spring of 2020. I started stumbling over articulating an occasional word. My morning coffee would unexpectedly drool onto my pajamas. It was odd, and over the next several weeks it got progressively worse. What was going on? Was it Covid-related? A Lyme disease-like palsy? An allergy?

I’ve been in excellent health my whole adult life. I have low blood pressure and cholesterol, I rarely get colds, for decades I’ve started the day with a brisk, 5-mile walk. The extent of my list of medications was an occasional Advil. My family history is equally encouraging, my mother just turned 90 and she is in top shape both physically and mentally.

My general practitioner offered a priority list of possible diagnoses: a mild stroke, a neurological issue, something ENT related, or something else. The head scan proved there was no stroke, a huge relief at the time. Because of the pandemic, getting an appointment with a neurologist was nearly impossible. Even regular patients were forced to wait months. I was able to secure a Zoom session with one doctor, but because of the limitations posed by a virtual exam he could only do so much. He suggested it could be Myasthenia Gravis (MG), uncurable but not fatal, which seemed to me like a pretty annoying affliction if that was what I had. He also floated the possibility of ALS, but I was positive that could not be me.

Desperate for help, I managed to get in to see a couple of other doctors, but not the neuromuscular specialist that I really needed. After each appointment, I started to get very concerned. MG was ruled out, and yet there seemed to be no other go-to, easily cured ailment that was offered. Don’t Google your symptoms, I was warned. And you should take a loved one with you to your next appointment. Yikes.

Finally, I did get in to see Dr. Belsh (now retired), the long-time head of the ALS team at Robert Wood Johnson. Sitting in his office plastered with ALS posters, with my loved one, was sobering and very, very scary. He confirmed that I have Progressive Bulbar Palsy, which would more than likely lead to full-blown ALS.

I have never known anyone personally who had ALS, but I did know that it is a terrible diagnosis. Still, it was stunning to learn just how little medical advancement has been made in the 80 years since Lou Gehrig.

In this age of space age science and battling pharmaceutical TV ads, this is just unfathomable and depressing. My loved ones were astonished as well at how dismal the situation really is. I have friends who have had to deal with other serious neurological illnesses–Parkinson’s, MS, e.g., and it seems like for them there are lots of new therapies, medications, and trials. But I am encouraged by the bump in research that the goofy Ice Bucket Challenge generated, and hope that I will be able to benefit somehow from that.

Two years later, I’m at a point that I can no longer talk, and I have a feeding tube. My limbs remain unaffected. Although to me I feel as if I’ve gone from 0 to 60 in a short time, I know that relative to other ALS patients my progression has been slow. I’m appreciative of the mobility that I still have. I’ve had to get creative with some solutions in order to communicate. I rely heavily on assistive voice apps.

I don’t go anywhere without my iPad which, when connected to a wireless keyboard, I can prop up and type in my side of a conversation at the doctor’s office, or at dinner with friends. I made a flip book of printed phrases (contact info, fill it with regular, etc.) that I carry in my purse.

Of course, living with this “new normal” is challenging. I get weary of strangers assuming that I’m either deaf or slow or invisible; of knowing that each day will be worse than the day before. But my previous experience with grief has informed my attitude now as well, and I try to live each day as best I can, in the most positive way possible.

Special thanks to Anne for sharing her personal journey with ALS. To continue to follow stories from people in the ALS community and to learn more about the disease, follow our blog at als.org/blog.

Anne Fahey is a graphic designer in Princeton, NJ, and won our 2022 Nationwide T-Shirt Design Contest for the Walk to Defeat ALS®.  Her design is a fantastic visual representation encompassing the Unlock ALS walk theme this year and was highlighted in a recent blog here. Congratulations again, Anne!

Register for an event near you TODAY! Whether you want to walk, run, ride, or just get soaked, your participation will help spread awareness and show the ALS community we’re all in this together.

I’m scared of what to come.

So sorry, Lydia. Your local ALS Association chapter can provide information, resources and support. Find their contact information at als.org/chapters.

My husband was diagnosed 1.5 years ago and is declining fast. All clinical trials should have no discrimination. Trying anything is better than nothing. Might add some insightful information while giving hope. The “pandemic “ wasted lives in more ways than just COVID. It stopped trials and stopped hope. ?

Thank you for sharing your story. It helps us all to feel less alone.

My husband was diagnosed with bulbar in fall of 2020. He passed away at the end of January. Bulbar did not affect his limbs, but he only lived 16 months after his diagnosis. He went on disability from work for the last 6 months and I cared for him at home until he passed. He was only 58 years old. We have been married 30 years and have 7 children. They have been so loving and supportive. We miss Jim every day. I am thankful that I was able to care for him with weekly visits from hospice. I am still grieving. He was my best friend.

So sorry for your loss, Patricia. My condolences.

As a caregiver to my wife of 48 years the whole disease is new to us and most people we know . Finding Drs. In the medical field that know very limited amounts about ALS is very limited . So here we are trying to do our best one day at a time .
My wife always took the responsibility of finances , cooking , cleaning , laundry shopping ., now it’s all my responsibility. I’m swamped but doing what I’ve gotta do when I’ve gotta do it . I’n thankful God has given me privilege of caring for her .

Dan, my heart goes out to you and your wife. The ALS Association's multidisciplinary care model brings together a team of specially-trained health care professionals who can address the many needs of people living with ALS. If you're struggling to find ALS experts, this may be a good place to start: https://www.als.org/local-support/certified-centers-clinics