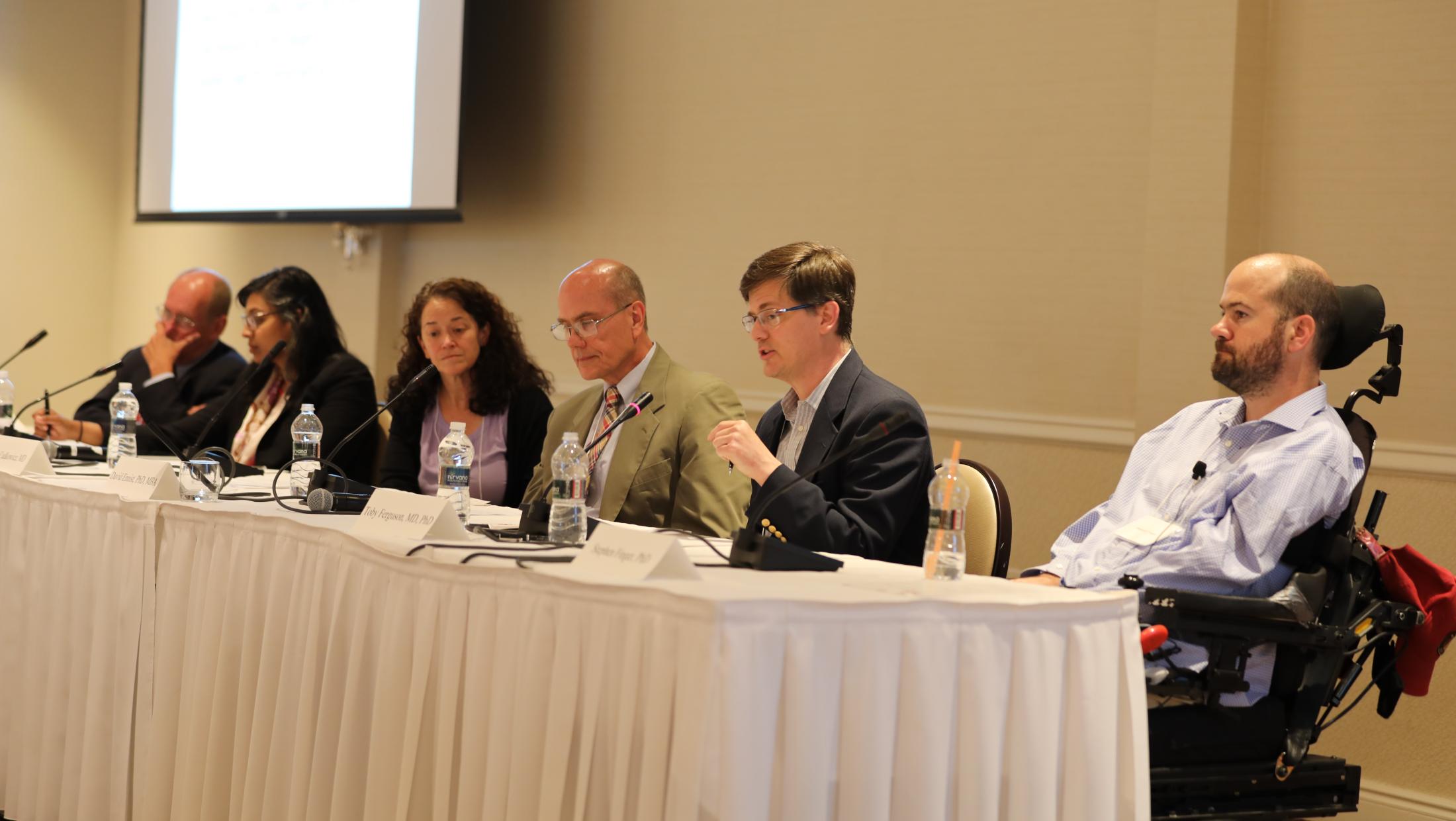 The ALS community recently presented its recommendations to the U.S. Food and Drug Administration (FDA) regarding the Amyotrophic Lateral Sclerosis: Developing Drugs for Treatment Guidance for Industry at a day-long event, called ALS Community Workshop: Therapy Development and Regulatory Pathways, which was held in Washington, D.C., on July 12. Over 90 people attended in person, with many more tuning in online.

Throughout the day, there were opportunities to make comments to the FDA and industry representatives, both in-person and online. The Association was proud to host the day to bring many ALS stakeholders together to provide targeted feedback and information to further inform the FDA’s Draft Guidance on ALS Drug Development.

The FDA’s Draft Guidance provides drug developers with recommendations for all aspects of clinical trials for ALS, from study design to risk-benefit considerations to patient selection. For many years, The ALS Association has worked closely with the FDA and members of the ALS community in the development of a comprehensive ALS Guidance to make clinical trials faster, shorter, and more responsive to special considerations inherent to people with ALS and their caregivers.

The Workshop was an opportunity to provide targeted feedback and information from the ALS community to further inform the FDA’s Draft Guidance on ALS Drug Development. After the Workshop, the Association composed a report to the FDA to address key points discussed at the Workshop and to make recommendations on how to improve the FDA’s final Guidance (listed below).

“The purpose today is to build a strong guidance together,” said Calaneet Balas, president and CEO of The ALS Association. “We will be taking the great ideas from this meeting and presenting them to the FDA for their consideration in developing the final Guidance document. We look forward to that document, and to seeing it used widely for making clinical trials faster, more effective, and more aligned with the needs of patients and caregivers. We believe that is the route to the fastest development of new treatments for ALS.”

Summary of the Recommendations to the FDA

The Workshop was organized around three topic panels, each featuring prominent members of the clinical research community and people with ALS who have taken on a leadership role in the ALS community-led draft Guidance initiative.

Click here to see a summary of the recommendations to the FDA on its draft Guidance, which are also included in the report to the FDA found here.

Click here for a copy of the Workshop final agenda and here for the panelist bios.

The day was filled with testimony from people with ALS and their caregivers, along with scientists and clinicians who conduct clinical trials.

Stephen Winthrop, MA, MBA, chair of the Association’s Board of Trustees, was diagnosed with ALS in 2013. He has, so far, been involved in 23 trials. Outlining the day, he noted: “There are often disconnects between the patient population and trial designers about barriers to entry, and how high they are. Conversation with patients can really break down those miscalculations, and trials would be faster and cheaper.”

“For one trial, we were at the clinic for eight hours,” she said. “It was exhausting, and it was too much. There should be fewer visits, and patients and caregivers should be included in the trial design process.”

Madeline Kennedy, RN, a tireless advocate and a person with ALS who was diagnosed in 2012, spoke about changing the risk/benefit calculation in trial design.

“We deserve to have that opportunity to try new therapies,” she said. “We are dying. We need to be more creative, more aggressive, and more flexible in development of new treatment options.”

One of the suggestions for more creative trial designs was to reduce the use of placebos in early-stage trials. Stephen Finger, Ph.D., who was diagnosed with ALS in 2013, spoke forcefully about this suggestion: “In these early trials focused on safety, we should be looking for effects that are significant or common enough that they should be obvious without a placebo. For a dose-response trial, if you are trying to distinguish the effects of multiple doses, it is more efficient to exclude a placebo. In terms of learning about efficacy in these small trials, we are not looking for a definitive answer, just an informative signal, which is more likely to come by leveraging external data.”

More creative ideas came from audience members, from panelists who work in data analysis and pharmaceutical development, and from clinical trial researchers. FDA officials were in the audience, heard the message loud and clear, and made some comments at the end of the day.

See the FDA Report Appendix C for comments submitted to the FDA Workshop inbox by the ALS community.