Loving and Caregiving for Someone Living with ALS and FTD 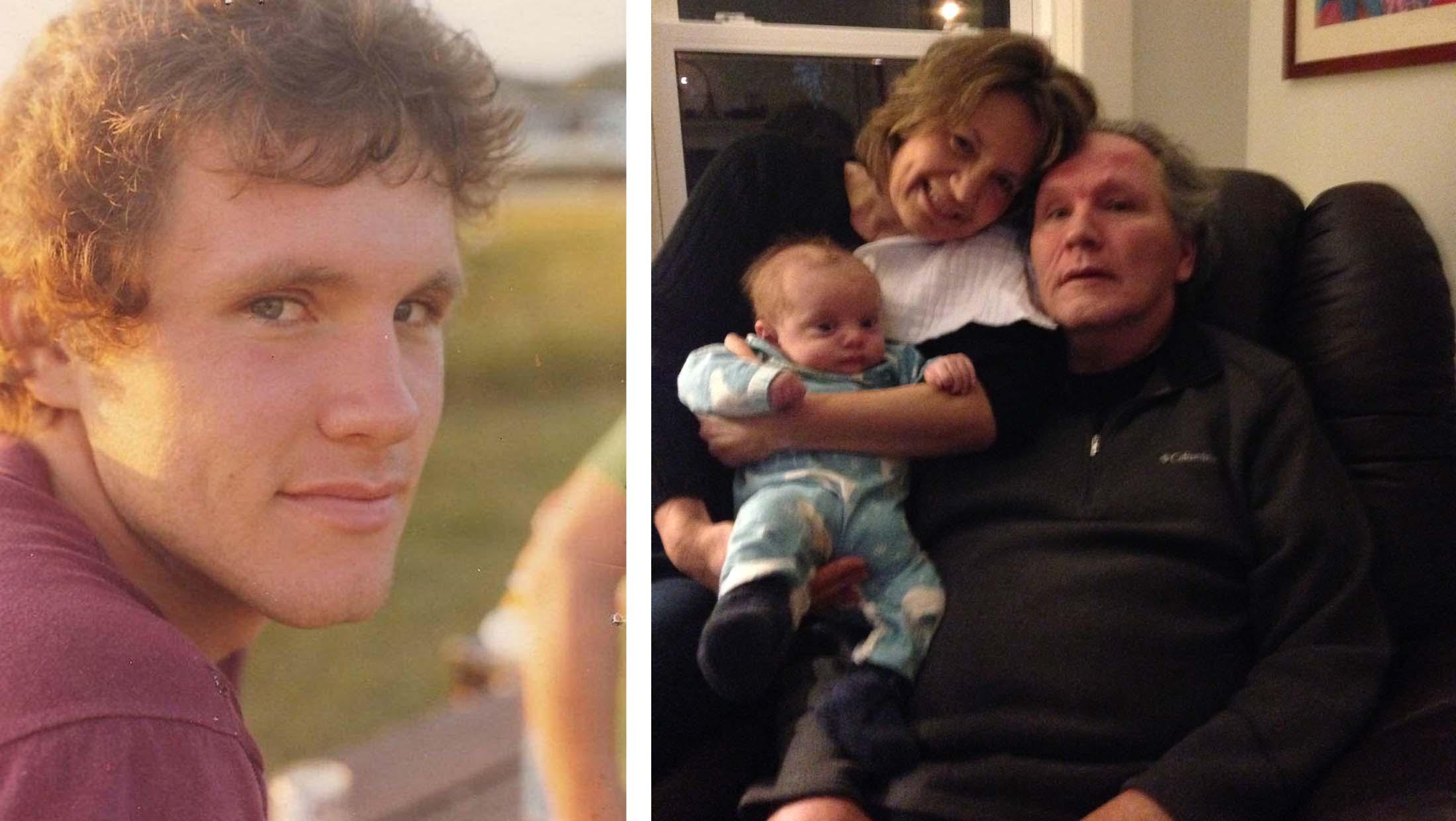 Before I tell you about Tom Ruhlman’s decline, I need to tell you this:

He was never sick; never missed a day of work.  He was adventurous, capable and in command. He seemed to know everything. By age 16, when I fell in love with him, he had lived in six countries and was bilingual. He cooked without a recipe: stirring up paella and jambalaya in his mother’s kitchen. By 17, he worked the night shift in a local diner, single-handedly managing the grill, the cash register, and the drunks.

As an adult, he was just as comfortable changing a diaper and coaching hockey as he was traveling the world for his job. He was the planner, the one who knew it was time to get married when we were 22 and 23, and the first of the two of us to suggest buying a house. As we raised our kids, he kept planning, keeping his eye on our 401Ks, investing money, and calculating the best way to save for college and for retirement.

We had forever yet to live.

With our two kids off to college, we were just settling into our empty nest when he lost his long-time job as a business executive. As he launched into his own business, I began to find some conversations difficult, like a link was missing. He seemed less driven than before, missing appointments, making flip remarks to employees and customers. But it was all very subtle. At the same time, he began to have fasciculations and night sweats. He had less energy on our early morning runs. We went to his family doctor and started exploring.

A year after seeking answers to his physical symptoms (while still going about our jobs and our lives), he commented that he didn’t have enough strength in his fingers to cut his fingernails. The weakness, coupled with the EMGs and the nerve conduction studies, led to his ALS diagnosis. He was on the slow track, we were told. “I have at least ten years,” he would rather cheerfully tell people when sharing his shocking diagnosis. He continued working, kept smiling, seemed only a bit fazed about his illness.

If he spotted someone in a wheelchair at an event or at the store, he would happily approach, matter-of-factly saying “I’m going to be in one of those someday!”

From early on, my role as a partner/wife and eventual ALS caregiver was complicated.

The diagnosis didn’t explain the symptoms I was seeing. I didn’t know what to think or do. His neurologist, looking at only the physical changes, was telling him he might be able to run his business for several more years. I suspected the business was failing but Tom was going full tilt ahead, wanting to borrow more money to expand.

Sometimes I was alarmed at subtle changes I saw, and other times he seemed so much just like himself that I felt guilty for even silently questioning his ability. It was confusing.

I searched the internet late at night and concluded that he also had Frontotemporal Dementia (FTD). Symptoms of FTD include a loss of empathy and executive function, an increase in inappropriate actions, a lack of judgement and inhibition.

Back in 2007-08, doctors and scientists were just learning of the link between FTD and ALS, but it was not as well documented and discussed as it is today. Now we know that 10 to 15 percent of people with FTD also experience motor neuron degeneration (MND), meaning they have FTD-MND; and that some people with ALS experience cognitive decline and even frontotemporal degeneration, called ALS-FTD.

Looking back, I believe Tom began to have atrophy of his frontal lobe before he ever had symptoms of the ALS. The kids and I look back even before 2005 and remember comments or behaviors that had seemed unlike him. We now know it led to his job loss.

It turns out that all the characteristics of FTD prevented him from ever completely understanding the devastation of the ALS diagnosis. And FTD itself kept him from ever perceiving any FTD-like changes in himself, even though he knew of the diagnosis once it was made. He didn’t know that FTD was what was taking him away from us.

And so, this is what I most want to say about being a caregiver when someone has both ALS and FTD: it is lonely. It is confusing, scary and tiring. The person you love is fading away both physically and mentally, and you can’t really discuss it.

We had walked side-by-side since we were 15 and 16, and now, in our 50s, I would need to carry it alone. From the early diagnosis when he was still overtly functional and in command (and sometimes inappropriate and even obnoxious because of the FTD), until the later stages when he needed a BiPap machine, a ramp, a hospital bed and morphine, I would need to take charge. He was facing one of the biggest challenges of his life, and yet he was altered enough that he wasn’t able to do all that planning he had always loved to do.

This is the sadness of FTD: by the time you know what it is, it is too late to say goodbye.

I read books and articles written by people living with ALS. As their limbs became weak, their senses became strong. Their writing was insightful and beautiful. I longed for him to “only” have ALS. I missed him so.  I wished the “real” Tom could come back, if only for a moment, to tell me what he wanted me to do.

When his hands became weak, he might have driven for many more months, maybe another year. He was still a better driver than me in terms of being alert and knowing instinctively what to do. But one scary incident on a highway made me realize he had the maturity and judgement of a 12-year-old. We had to take the keys away.

The mental losses were more startling and difficult than the physical. I remember the morning the still-physically-capable man asked me how to make oatmeal. This is the guy who taught me to cook, and there I was, writing a note in big letters to leave on the counter when I went to work:

Eventually he became a toddler, too diminished to ask about cooking oatmeal.

FTD makes some people become mean or angry. We were lucky in that way. Tom remained cheerful, friendly and upbeat. He never forgot the people he loved. As his illness progressed, his eclectic and broad taste in music zeroed in on John Denver. He liked to go on short road trips, and we would sing along to “Country Road,” “Calypso” and “Sunshine on My Shoulders.” Our lives became narrower, simpler. Along with him, I learned to live in the moment.

When asked how he was doing, no matter what he had lost, he almost always responded, “I’m doing fine.”  Was there regret? “It is what it is,” he’d say.

The overriding feeling between us, and in our household, was love. I learned to listen to the lessons he was still giving me, through his resilience and his determination, even as he lost his language. Breathing into his BiPap at night, I could hear him chanting. Listening closer, I could hear him saying “Pura Vida, Pura Vida,” the Costa Rican saying for “good life.” 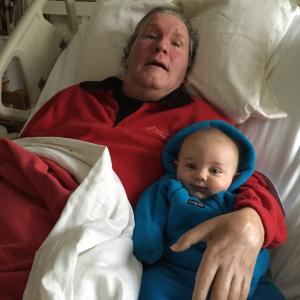 The biggest challenge for our children and me was to love him as he changed AND to also try to hold on to the memory of who he once was. When a loved one has FTD, you grieve their losses, one by one, for them and for yourself and for others.  And, as time goes on, you grieve your own loss of the memories. Because you begin to forget who they were and how they made you feel.

I felt this conflict from the very start of Tom’s journey with FTD, when he was still a functioning person. I felt so divided with grief and wrote this poem to myself at the end of a workday, before heading home to the subtly changed man.

Who to be loyal to? The man you first loved at 15,
who dressed in white for your wedding and vowed to love you forever,
or the man in front of you right now
with the same blue eyes and curly brown hair, with a personality that is subtly, almost imperceptibly changed?

To love and honor the man of today
seems like letting go of the real boy – the adventuresome, athletic, Indiana Jones – who won your heart and grew into the man who became the father of your children.
To overlook changes out of kindness is like denying he was ever brighter, stronger, less silly and more capable.
It is heartbreaking to let go.  It seems a dishonor to his memory.

Yet of course there is only one answer.
Loyalty doesn’t have to be divided.  There is no choosing one over the other.
To love him today is not to deny loving him yesterday.
He is who he is.  You must love him now, just as you loved him then.
The greatest challenge is to do both:
Remember him as he was
and honor him still as he changes before your eyes.

Sometimes the kids and I agonized over the fact that we were forgetting the well man. But since his death in 2015, we’ve worked hard to remember, and we find he is coming back in those memories.  We honor him by sharing stories of “Papi Tom” with the grandchildren he never met. It helps me to write about him, and to share our story, in the great hope that I might help someone else who is facing this … and in the greater hope that science can find a cure and obliterate ALS and FTD.

Special thanks to Lori Ruhlman for sharing her personal journey as caregiver for her husband, Tom. To continue to follow stories about people living with ALS in the community and learn more about the disease, follow our blog at als.org/blog.

My husband had ALS, first symptom was weakness in his fingers, one day, we had a dream life with early retirement and then, when we went to find out abt the weakness, our whole world changed. There are so many things that can be said abt the suffering and frustration of people with ALS, we look back now and realize in many ways how lucky we were, we had time to enjoy life and above all we all had time to say goodbye, many people lose loved ones without closure.
I can’t imagine going thru all that you and your family had to live with daily.
You have my admiration and above all remember the young man you fell in love with.

My husband also passed from FTD/ALS.
My story is similar but much more accelerated. We were on a run-away train for 11 months.

My story is similar but much more accelerated. We were on a run-away train for 11 months until he passed. Thank you for sharing your story it helps me to remember how wonderful a man he was despite his untimely death. He was 63. ❤

Maureen,
My heart aches for you. "...a run-away train for 11 months" says it so well. I can't imagine such a fast progression. How long ago did he die? My husband was 60, and he faded away for at least eight years.
I wish we could talk.
Lori