Join us Today in Celebrating Rare Disease Day 2021 and #ShowYourStripes 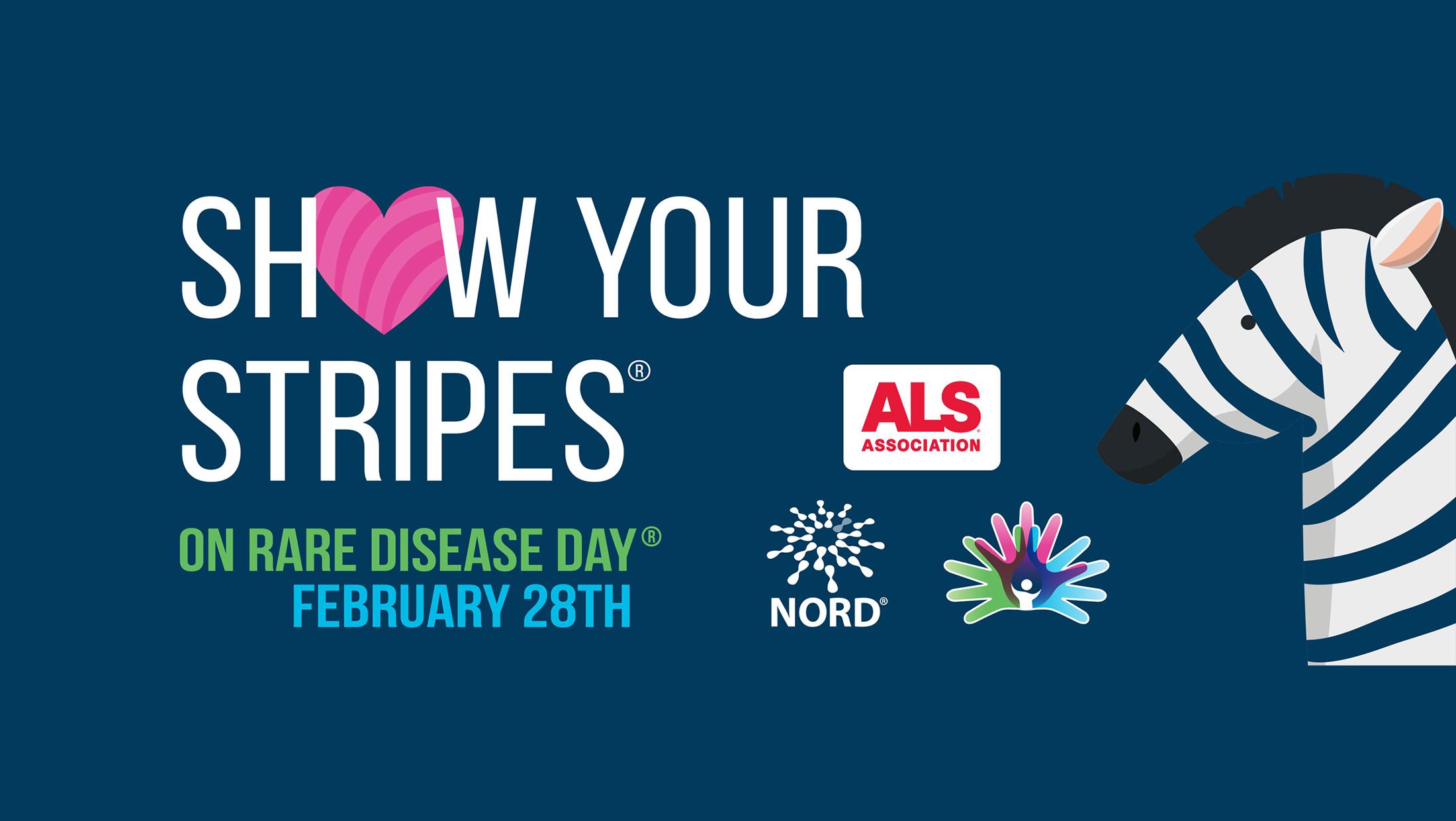 Rare Disease Day® takes place on the last day of February each year, a special day to raise awareness of rare diseases and their impact on the lives of those who are living with one. According to The National Organization for Rare Disorders (NORD), any disease affecting fewer than 200,000 people is considered rare in the United States. That is based on the definition from the Orphan Drug Act of 1983.

Rare Disease Day® is an opportunity to recognize strength in coming together. It is estimated there are more than 7,000 rare diseases affecting 25-30 million Americans.  That means one in ten Americans suffer from a rare disease, including people living with ALS.

On a recent podcast episode of Connecting ALS, we spoke with Debbie Drell, director of membership at the National Organization for Rare Disorders, to discuss Rare Disease Day and the origin of NORD’s annual “Show Your Stripes” campaign to help raise awareness of people living with rare diseases.

A portion of that conversation has been edited and condensed below.

What is the importance of Rare Disease Day and talk to us a little bit about what it means in the space?
The organizations that work on rare diseases are focused on their missions, focused on their work: very short-staffed, small, bootstrap nonprofits many of them, the 330 disease-specific organizations that are our members. But then on one day, and sometimes the entire month, we all come together to amplify our voices. And it started by EURORDIS in 2008, but now it's a patient led international campaign that brings in not just the 30 million in the United States, but 300 million impacted worldwide. And now there's 65 countries taking part in Rare Disease Day. The US sponsor of Rare Disease Day is NORD. And we ask all stakeholders -- drug companies, research institutions, universities, our Students for Rare chapters, our 15,000-member Rare Action Network across the 50 states -- to join in. Everybody's doing something for Rare Disease Day. It's almost like our version of a high holiday, like Christmas or Hanukkah, where everybody's really busy coming together, celebrating and highlighting what unifies us.

What are some of the things that you and NORD are planning for this year? I know you've got kind of a cool theme with Show Your Stripes. Can you explain that to us?
The zebra is the rare disease mascot. It’s a concept taught in medical school -- this medical zebra. When doctors hear hoofbeats, they think of horses and not zebras, but sometimes it's a zebra. So that’s stripes. When you play on that aspect of it, we all are unique in the stripes that we have with our rare diseases, but we're all zebras at the end of the day. And so, the Show Your Stripes campaign is a hashtag, #ShowYourStripes. So, you #ShowYourStripes and take a picture, posting your story and a message of support. You know, so I would do it with my sister, a picture of us wearing zebra ears, or posing with something cute. She's beat the odds because organizations like NORD are fighting for treatments. And my sister wouldn't be alive honestly, if it wasn't for NORD and the Pulmonary Hypertension Association, driving rare disease research. Now there's treatments for her disease. So that would be our message. But we're asking everyone to share what your story is, your disease. Educate your families. Take a moment to raise awareness about your disease and all rare diseases with #ShowYourStripes.”

It can be overlooked, or maybe underappreciated, the extent to which personal stories can really resonate with people. Can you talk a little bit about that? About the power of individual storytelling to really make a connection with people who might not otherwise think of a connection to the rare disease community.
Here's what's crazy. And I love this. The second you start talking about a rare disease -- and you really, it's almost coming out of the closet with the rare disease-- and you start talking about it: it's one in ten Americans. So, if you say, “I have a rare disease”, or, “I know someone who has a rare disease,” people will start telling their stories. ”Oh, I know somebody who has a rare disease,” or ”I have a rare disease.“ So, when you share your story, you actually embolden others to share theirs. You embolden the one in ten to be proud and to open up about it. It's about being vulnerable, and it's about talking about the health challenges that we experience. And now more than ever during the pandemic storytelling is keeping us alive. We're talking about how hard it is.

If you would like to listen to the complete interview with Debbie Drell and learn more about how you can share your story and participate in Rare Disease Day, visit ConnectingALS.org HERE