Jackie Heltz: My Journey as an ALS Volunteer 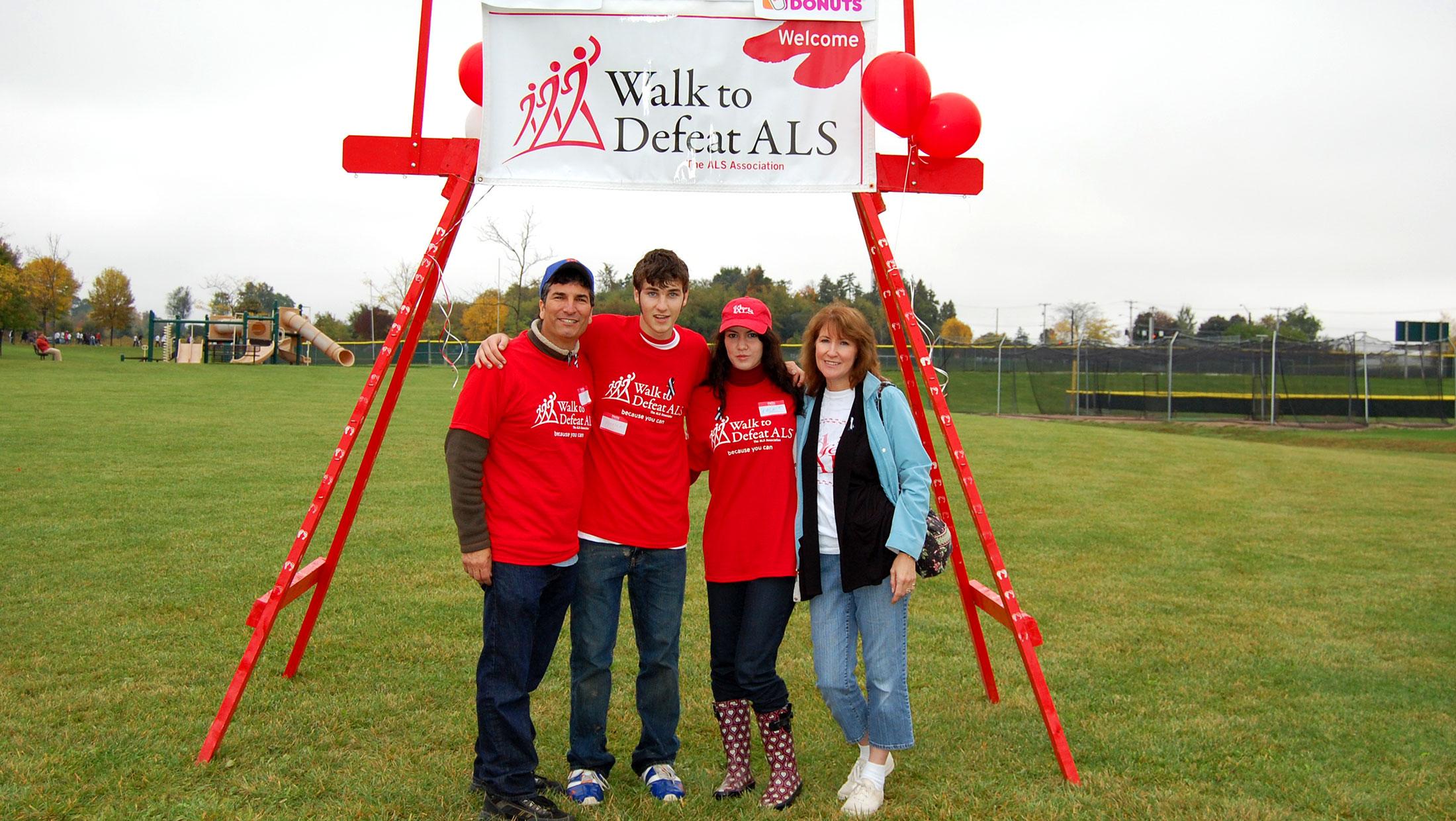 In recognition of National Volunteer Month, we are shining a spotlight on some of The ALS Association’s amazing, dedicated volunteers and highlighting the incredible work they are doing to support our mission.

Volunteering for The ALS Association is the longest I’ve ever done anything in my life, aside from knowing my parents and siblings, really. There’s no place I’ve worked, studied, or even lived for nearly as long. Sure, my role and responsibilities as a volunteer have evolved over time, but how could they not? It’s been twenty years.

My journey with The ALS Association Northern New England Chapter started around the turn of the century. The 21st century that is. The one with butterfly clips and N’Sync and AIM. Well, that was my reality in high school in 2000. It was also at that time that my paternal grandmother, Lucrezia Heltz, was diagnosed with ALS. And then my reality changed.

For someone my age who hadn’t lost so much as a pet bird, my grandma’s battle with ALS was difficult to witness. The disease first expressed itself with slurred speech, then swallowing and later use of her hands.

My freshman year history class assigned us a genealogy project prompting an exploration of our family tree. We happened to be visiting my grandparents at the time and I remember feeling so conflicted about interviewing my grandma; wondering if I would make her uncomfortable as I sat there, pen poised while she labored through her answers. My mom made me do it, and in the end, I’m so lucky I did. I learned about her parents’ immigration from Bari, Italy; how her family ate baccalá (Italian-style codfish) and eel on holidays, how delighted she was to raise a family in the same neighborhood she had grown up in, and how she hoped to leave her family with the words “live a good life.”

A few months later, my little brother grabbed his Razor scooter and with my sister and I in tow, went door-to-door with our little paper pouch to raise money for what would be our first of many Walk to Defeat ALS® events. We established Team Give ‘Em Heltz and in the fall of 2001, walked three miles around the track at the fairgrounds, still not knowing very much about this disease or how quickly it would take my grandmother from us.

She passed away just after her 74th birthday in January 2002. Her mother did too at that age from ALS, way before I was born. Still, my family kept going to Walks and finding new ways to get involved which I think a lot of families and friends of people with ALS do. When it comes to a disease so frustrating and incapacitating, having an outlet can be pretty cathartic. It gives you direction. There’s something actionable there in a situation where you are left powerless.

We laced up our sneakers and took those steps at our first Walk to Defeat ALS® in honor of my grandmother in 2001. But every walk since has been in memory of her. And that’s true for so many people who care and donate their time. A couple of laps around our neighborhood turned into selling raffle tickets at baseball games. My father served on the board, filmed commercials, and played DJ at walks. My mom ran arts and crafts booths and was a face painter for the kids. I remember blasting the heat in my Chevy Malibu to keep pizzas warm as my brother and I picked up donated pies from five different locations for a Walk one year. They were all little things, but they felt like a place to put our energy.

During my senior year, my “Grad Challenge Project" required us to complete a certain number of hours of volunteer work in conjunction with the creation of a tangible product. I found myself at the chapter office stuffing envelopes and cold calling other walk participants. For the tangible product, I tapped into my interest in radio production and, with my father’s help, created a series of PSAs for the Association complete with original music and interviews that aired throughout the region.

After leaving Vermont to attend college and eventually moving to New York City, I still felt connected to the ALS cause and the Walk; to giving others a safe space at least once a year where everyone knew what you were going through. From afar I wrote press releases to local newspapers and secured in-kind donations. I arranged walk-day musical entertainment of course, we had to have Ben & Jerry’s ice cream after a 5K around the park or wherever it was held that year.

One year I was asked to assist in taking photos, which became part of my annual walk-day tradition. Parked by the team photo sign and a tripod or running alongside the throngs of participants along the course, I met teams of walkers who showed up in groups from two to what looked like one hundred people. Wearing tie-dye, camouflage, or neon-colored T-shirts customized with punny names and touching images of the reason they walk, the team photo always felt like a little moment of triumph, a moment of joy and solidarity that we all needed.

After 16 years, Team Give ‘Em Heltz was ready to hang up our hats and take a break from the disease that had consumed so much of our lives. Then, in the summer of 2016, my mother’s sister, Pat, was diagnosed with ALS. Pat has no relation to my father’s family who had the disease. I was shocked. What was happening to my family? And what common thread had landed them all on this side of a terminal diagnosis? So, we continued to walk and continued to fight. 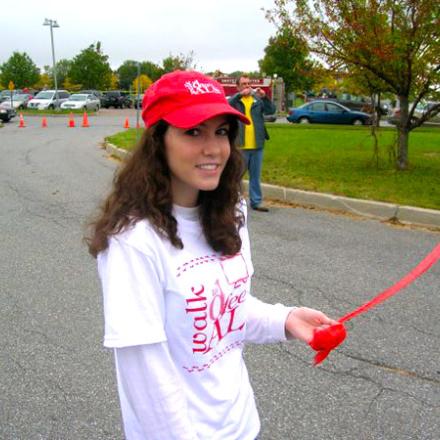 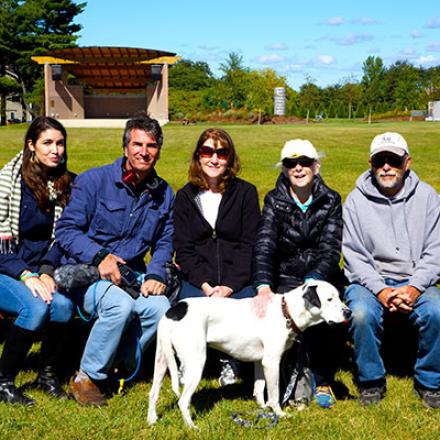 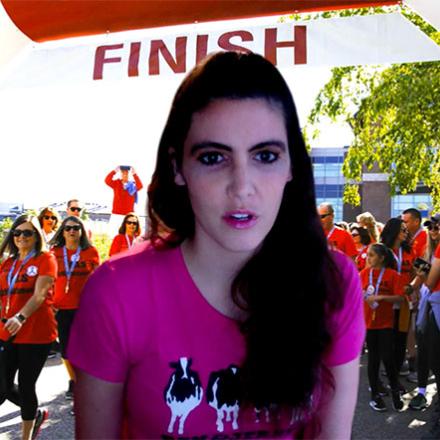 As the world went remote in 2020 and our connection to others slipped into a scary and unfamiliar virtual space, my volunteer work with the Chapter shifted and became reinvigorated. Using video and virtual platforms, we were able to bring kick-off events, powerful messaging, and even the annual Walk right into the homes of walkers, new and returning in Vermont, Maine, and New Hampshire.

When so many of us felt disconnected and grasping for any semblance of normalcy, editing together event videos and co-producing a series of virtual events brought me even closer to the ALS community. Celebrating teams and their accomplishments hasn’t stopped because we weren’t able to gather. And while it has been a huge adjustment, I don’t think these last two years were lost. We walked, we spread awareness, we promoted research, and we shared our experiences. There’s always more to be done, but creating an environment, virtual or in-person, where people impacted by ALS feel welcome, empowered, and heard is so important.

I don’t know what the next 20 years will look like for The ALS Association and the disease itself, but I think things are going to change for the better and I hope to be part of it.

Special thanks to Jackie Heltz and the team at The ALS Association Northern New England Chapter for allowing us to share her inspiring story of her fight for the ALS community.