Brenda and Kelly Kraft: One Couple’s Experience with Feeding Tubes and ALS

In most people’s journey with ALS, they will be faced with the decision of using a feeding tube to help maintain proper nutrition and enhance their quality of life. As part of the ALS care planning process, it is important for patients to discuss options with their multidisciplinary care team, weighing the pros and cons, and understanding how their decision will affect their life while they are capable of making these decisions with the least amount of stress and difficulty. 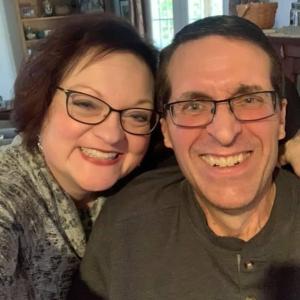 As Feeding Tube Awareness Week comes to a close, we spoke with Brenda and Kelly Kraft and asked them to share their family’s story about their personal experience with making this difficult decision, and the relief they felt once they had made it.

Please tell us a little about yourself and your journey with ALS.
My name is Brenda and my husband, Kelly, and I have been married 20 years. All Kelly's life he has been a weightlifter and healthy eater. We walked 5 miles a day everyday together or we would do an exercise video together. In the spring of 2019, he started having trouble keeping up with me, then he started having trouble cutting the grass because his back hurt, and he was just too tired. Several falls, walking sticks, walkers, doctors, tests, and a spinal surgery later, an EMG in March of 2020 definitively diagnosed ALS. The doctors suspected he had had it a couple years and gave him 2-4 years to live. To say the last 11 months have been devastating is an understatement. Kelly is completely wheelchair bound and I am his 24-hour caregiver. His ALS Functionality Rating Score has gone from 38 in March to a 5 last month. He has declined rapidly, and my heart is broken.

At what point did you find out you should consider getting a feeding tube?
Initially, Kelly was adamant that he did not want a feeding tube or a tracheostomy, as he has worked in the medical field his whole life and he knew what ALS would do, and did not want to do anything to "prolong the agony." However, as Kelly's swallowing began to become an issue, he aspirated on water while taking pills a few times and it scared him terribly. He never choked on food, just water, but the fear of choking consumed him, and he became afraid to eat. Kelly weighed 250 pounds in the summer of 2019 but as his muscle began wasting away, and his appetite lessoned, he was down almost 100 pounds to167 pounds by August of 2020. At his ALS Clinic in September of 2020, his neurologist suggested a feeding tube to help with the weight loss. He shared his opinion about feeding tubes and tracheostomies that made a lot of sense to us. He said a feeding tube would allow Kelly to get all the nutrition he needs and would help him "feel" better and therefore enhance his quality of life, whereas a tracheostomy would merely sustain his life regardless of the quality. 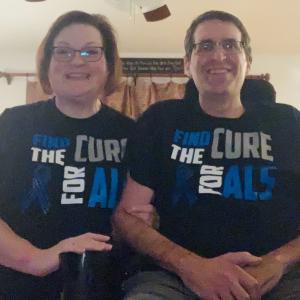 How did you feel when you learned it might benefit you?
We felt some relief that he could feel better and stronger if he chose the feeding tube, and he did. One benefit was that they said he would be able to either eat by mouth or use the feeding tube. Since he had never choked on food before, we thought he would continue to eat by mouth until he couldn't swallow anymore and this would be in place for "just in case," however, once he began to eat through the tube, it relieved his anxiety so much, he chose to use the tube exclusively. The only thing he eats is one teaspoon of applesauce per day to take a pill that does not come in a crushable or liquid form so it can't go down the tube.

Is there anything you’d like to share about the experience of making the decision and having the procedure?
I think the decision is a personal one and there is not a right or wrong answer. Whatever the patient chooses is an acceptable option and should be embraced and supported. It is not an easy decision, but the doctors told us that if we were considering a feeding tube that we should do it sooner than later because if his respiratory function decreased too much he may not be able to withstand the procedure. They told us it would be an outpatient procedure, but because he has ALS and sadly, most doctors and medical professionals don't know much about it, they kept him for 2 days as a precaution. There were no complications.

One thing I would suggest is, as the caregiver, be prepared to fight. Make the medical staff listen to you. Here is what happened to us. As you may know, ALS patients should never have straight oxygen, unless it is fed through the Trilogy, otherwise they can get a buildup of CO2 because they can't exhale it. I told them at registration, the nurses, the surgeon, and the anesthesiologist, and I sent his Trilogy with him into the procedure room, but when he came out of surgery he was on 3 liters of straight oxygen and they couldn't understand why he was gasping for air! I literally ripped it off his face and put his Trilogy on, and he quickly responded. I was more than angry but I kept my cool, until later when I wrote a letter to the Hospital administration office. The moral of the story is, you can't over communicate enough about ALS, because the medical community as a whole truly don't know much about it. They assume if they are having trouble breathing, they need oxygen.

How did your life change after the decision was made?
One thing that changed after he got the feeding tube was the realization that EVERYTHING revolves around food! Holidays, birthdays, parties, family visits, everyday survival, etc. It made it very awkward to make a meal that made the house smell good, and everyone eating, when Kelly couldn't enjoy it too. I then started eating terribly. I was choosing quick things I could throw in the microwave or eat cold, so I didn't smell up the house with good smells. I gained 10 pounds in 6 months (which was also partially stress eating), so I decided I had to take care of myself if I was going to take care of my husband. Since Kelly takes a long 4-5 hours nap/rest every afternoon, I decided to cook meals while he was sleeping, that way I could cook healthier without torturing him with the smells. He never ever complained and told me not to worry about it, but I was the one who felt guilty.

Secondly, there is the medial care side of things and the administrative side. Feeding tubes have drainage it has to be cleaned and dressing changed at least once a day. I do it twice a day and we have never had an infection, but I am told infections are common. Administratively, there is the ordering of formula, syringes, gravity bags, 2x2 gauze squares, swabs and bottles of saline that you need to keep up with, plus any billing or insurance issues.

What would you tell (or advice would you give) someone with ALS who is faced with this decision?
We are glad we made the decision for a few reasons. First, it has allowed Kelly to maintain his weight much better and he feels better. Most medications come in a crushable or liquid form so meds can go through the tube and we no longer have to worry about aspirating just to get medicine down. I will be honest in that it is time consuming to set it all up, clean the syringes, etc. My husband eats 5 cartons of formula per day, and because he has a lot of liquid medicine, he can only hold one carton at a time. Since he naps 4-5 hours in the afternoon, that means he has to eat every 2 hours in the evening. Another BIG advantage is if you strictly use formula, is it really helps with the constipation issue that most all ALS patients eventually struggle with. By always eating the same thing, his body responds well, and his bowel movements are predictable and comfortably loose (no diarrhea or constipation). Sometimes it seems like we have just finished when it’s time to eat again, but in the long run, it has been a good decision for us and we are thankful it was an option and that we had it done early enough that he could benefit from it.