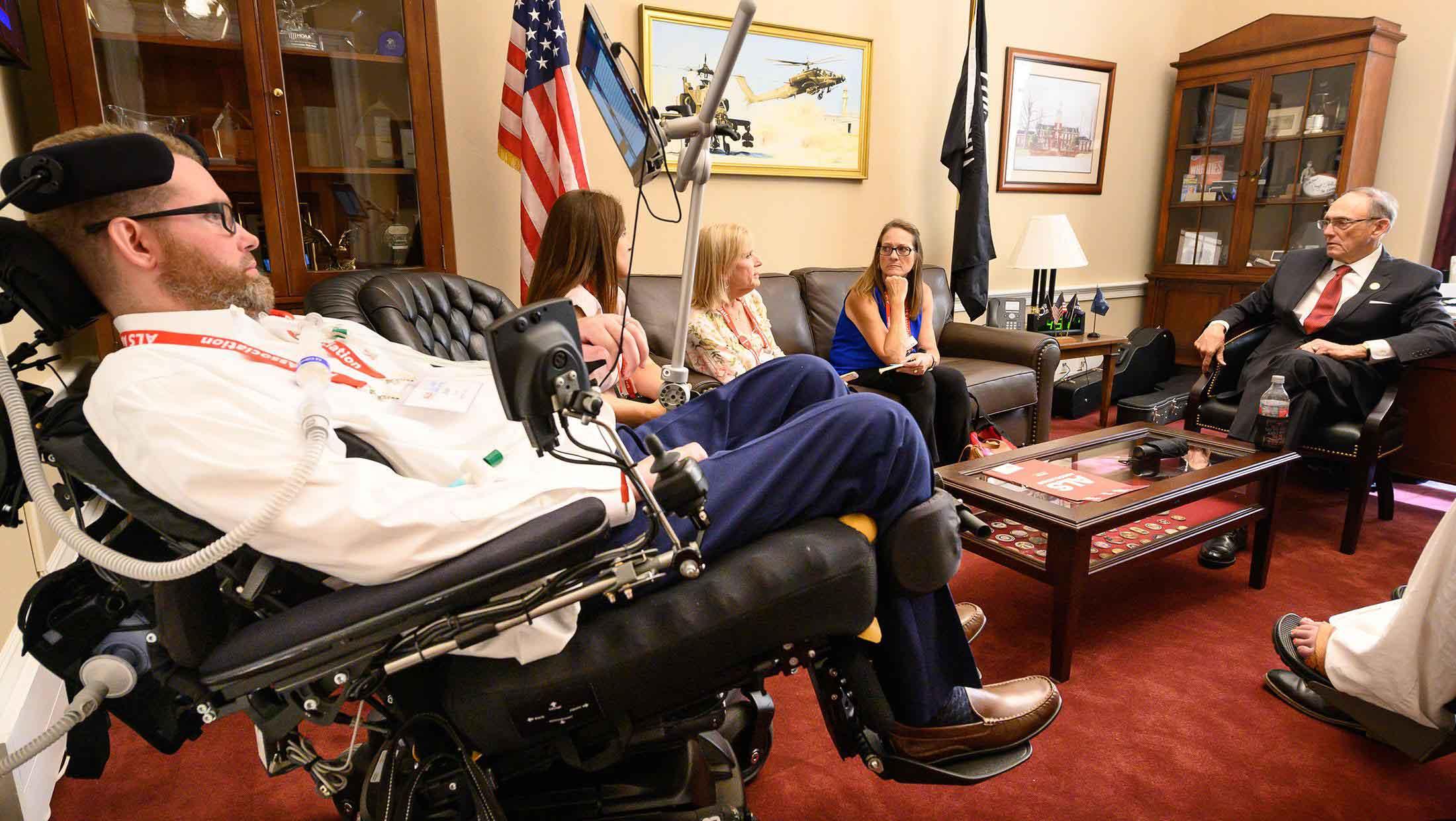 The ALS Disability Insurance Access Act went into law Tuesday, removing the 5-month delay for people with ALS to access the Social Security Disability benefits. This marks the culmination of a multi-year fight by ALS advocates across the country.

The law will not go into effect immediately because the Social Security Administration must write rules for how it will be implemented, typically taking around 60 days following signing of a bill. Until those rules are written and implemented people with ALS applying for Social Security Disability will continue to face a five-month waiting period. The ALS Association will continue working with the administration and Congressional leaders throughout the rulemaking process to make sure the process is completed as quickly as possible.

In the meantime, it is important to reflect back on the path to victory. As Sen. Sheldon Whitehouse (D-R.I.) said after the Senate passed the bill, this was made possible because of the hard work, determination, and perseverance of ALS advocates across the country.

The ALS Association has made this issue a priority since it was first introduced in 2016, recognizing the incredible financial stress the community bears with an ALS diagnosis. ALS Association advocates reached out to members of Congress more than 54,000 times since then to build support for the bill, including during in-person meetings in Washington, D.C. during the Association’s annual advocacy conference.

Those visits to Capitol Hill each year illustrate the fierce tenacity and perseverance of ALS advocates. While ALS Advocacy Day on the Hill is exhilarating, it is oftentimes exhausting and presents incredible challenges to these warriors, determined to share their stories, and show people what it’s like to live with this disease.

The logistics of travel when living with ALS can be daunting and requires extensive planning to ensure safety and accessibility during these visits. ALS advocate and caregiver, Tabitha Wandell, who traveled to Washington, D.C. with her husband Josh, recounted their trip from Elizabethton, Tenn. to Capitol Hill in 2019. The couple needed special medical equipment and a nurse to help with Josh’s care during their trip. “It was difficult to travel,” Tabitha said. “The lift we brought did not raise up high enough to get Josh all the way in the bed, so we had to stand on the bed and hoist him the rest of the way in.”

The Wandell’s traveled from office to office on Capitol Hill to tell their story repeatedly to legislators and legislative aids. “It was emotionally and physically exhausting,” she said. But Tabitha and Josh recognized the need to make the sacrifice to be there, to help legislators understand the devastating impact ALS has physically, financially, and emotionally on families.

Steve and Lynn Ziegler, ALS advocates from St. Louis, Mo. made their first trip to Capitol Hill in 2015, just weeks after Steve’s ALS diagnosis at age 32. On their first visit, Steve was still able to walk when visiting lawmaker’s offices, so the trip was much easier. But on subsequent trips, because his ALS symptoms had progressed, Steve was forced to use a power chair and a bi-pap machine. Like other advocates who had traveled to Washington, D.C., Steve and Lynn needed accessible accommodations, secured necessary equipment like Hoyer lifts, and needed help with transportation that accommodated a power wheelchair.

But that was not going to get in the way or hinder their passion. On his latest trip in 2019, Steve wore an action camera to give people an idea of what a day as an advocate is like, and what these amazing families must endure just to have their voices heard.

Despite the many challenges they faced, Tabitha says after seeing the bill pass, she felt it was all worth it, but she wished Josh had lived long enough to see it happen. “It brought tears to my eyes when I saw the news about the bill. It was an honor to participate in ALS Advocacy Day.”

The ALS Association salutes the many people with ALS, their families, supporters, and loved ones who have fought so hard with us to make this legislation a reality. You truly inspire us all. Now on to the next fight!

Hello. When will the disability act bill be sent to the president for signature?
Thank you

Hi Laura. The president has now signed the bill!

I disagree that it will take 60 days and that applicants now will have to wait five months. The Law states that it is effective for applicants as of the date it became law. So an applicant Dec24 will not have to wait, it should be interpreted as retroactive.

I may have ALS. No-lateral numbness in hands and more. With COVID the overriding concern right now, I’m having a real problem getting to see a neurologist to determine what I have.

Hi Joe, I'm so sorry to hear that. Your local chapter of The ALS Association can recommend neurologists and ALS specialists in your area. You can find their contact information at als.org/chapters.

What about the veterans who got ALS from Agent Orange in Vietnam? Do we qualify for it?

Hi Robert. Veterans living with ALS qualify for Social Security Disability benefits. You can get resources and read about other benefits you may qualify for at https://www.als.org/navigating-als/military-veterans

"This marks the culmination of a multi-year fight by ALS advocates..."

"The ALS Association has made this issue a priority since it was first introduced in 2016..."

I wouldn’t be very proud of the fact that your effort took 4 years for the ALS Disability Insurance Access Act to pass. Rather, I’d be embarrassed!

Hi Richard. While we wish the bill had been passed sooner, the time it took was not due to a lack of effort. As the blog states, ALS Association advocates reached out to members of Congress more than 54,000 times to build support for the bill.

Thank you for your response.

Yes, the effort is very much commendable, 54,000 times is an astronomical number.

Two quotes come to mind; Albert Einstein, “The definition of insanity is doing the same thing over and over again and expecting a different result.” Also, James Ling, “Don't tell me how hard you work. Tell me how much you get done.”

Lou Gehrig died 80 years ago and since that time only two drugs have been approved which only extend life for about 3 months, not a very impressive track record of accomplishment.

Unfortunately, I don’t have the answers. Hopefully people smarter than I can come up with more efficient, out-of-the-box ways to achieve the goals needed by ALS patients, because with the average lifespan of an ALS individual to be just between 2 to 5 years and their quality of life years considerably less than that, four years to achieve an accomplishment is a lifetime for an ALS patient.

Hi,
My name is Hope Swanson and I have ALS.
I've been denied SSDI,because I make to much money and haven't worked the last 6 years.
Is this correct I contacted Morgan & Morgan and they refused my case.
Do u have any answers or help.

Hi Hope,
Sorry to hear you are living with this awful disease. Your local chapter can provide support and help you navigate benefits. Find their contact information at als.org/chapters.

I am awaiting a positive diagnosis of ALS, as I am in the early stages. What will the bill cover? Has the five-month wait been eliminated?

Hi Carolyn. So sorry about what you are going through. The bill eliminates the five-month wait that people with ALS previously had to go through before receiving Social Security Disability benefits. Your local chapter can help you navigate the benefits that are available to people living with ALS, and their contact information can be found at als.org/chapters.

I’m currently in the five month waiting period and if it weren’t for family I’d be worse.

Hi Mary. Sorry to hear that. Because of this bill, you should not need to wait five months to begin receiving your benefits. Read more here: https://www.als.org/blog/ssdi-and-medicare-faq